Margaret Heather Christian
Olivia James Christian
Kellie Noelle Martin is an American television actress and voice actress who is best known for her roles as Chàristy Huddleston on the CBS drama series Christy from 1994 to 1995, Lucy Knight on the NBC medical drama series ER from 1998 to 2000, and Rebecca Thatcher on the ABC drama series Life Goes On throughout its entire run, from 1989 to 1993. She also voiced Daphne Blake in A Pup Named Scooby-Doo! in 1988-1991 along with Carl Steven.

For Disney, she was in two made for television movies: The Richest Cat in the World as Veronica and Help Wanted: Kids as Linda. She also voiced Sadira on the Disney animated series Aladdin, Mona in Mickey's Twice Upon a Christmas, and Roxanne in the 1995 Disney animated film A Goofy Movie. She was additionally featured in some television movies. In September 1994, she played a high school student who murdered one of her classmates in Death of a Cheerleader and in May 1995, she played a battered wife in If Someone Had Known and a missing child in The Face on the Milk Carton followed by Her Hidden Truth in November 1995 where she played a young woman who was accused of murdering her mother and baby sister in a house fire, Hidden in Silence in March 1996 where she played a teenage Polish catholic trying to protect a Jewish family from the Germans and Her Last Chance in April 1996 where she played a drug addict who got out of rehab and was accused of murdering her boyfriend. She even played Linda in Help Wanted: Kids, Veronica in The Richest Cat in the World, Julie Zelman in the ABC TV show, Grey's Anatomy, Michelle Larsen in the ABC TV show Private Practice and Army Captain Nicole Galassini in the ABC Studios TV show, Army Wives. 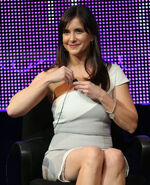 Kellie Martin speaks at the Smooch panel at the 2011 Winter TCA Tour.
Add a photo to this gallery
Retrieved from "https://disney.fandom.com/wiki/Kellie_Martin?oldid=3793254"
Community content is available under CC-BY-SA unless otherwise noted.