Disney Wiki
Register
Don't have an account?
Sign In
Advertisement
in: People, Males, Beauty and the Beast,
and 32 more

He attended Lamar University for two years before, in 1980, transferring to the renowned California Institute of the Arts, where he studied animation and filmmaking. He is known for being an artist in a variety of capacities on many animated movies.

For Disney, Asbury served as a storyboard artist for several films listed below. He also directed the 2011 Touchstone Pictures film, Gnomeo & Juliet.

Outside of Disney, he directed Spirit: Stallion of the Cimarron, Shrek 2, Smurfs: The Lost Village, and UglyDolls.

Kelly Asbury with Rob Minkoff sitting outside CalArts in May 1983. 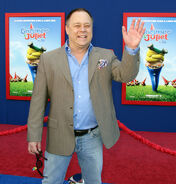 Kelly Asbury at the premiere of Gnomeo & Juliet in January 2011.