Kelly Marie Tran is a Vietnamese-American film actress known for her performance in CollegeHumor Originals, as Margeurite in About a Boy, and as Sara from Life on Normal Street.

For Disney, she portrayed Rose Tico in Star Wars: The Last Jedi, the eighth episodic film in the Star Wars series, and reprised her role in the ninth episode and in Star Wars: Forces of Destiny. She voices Raya in Raya and the Last Dragon.[1] 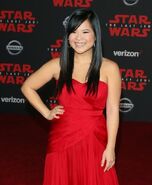 Kelly Marie Tran at premiere of Star Wars: The Last Jedi in December 2017.

Kelly Marie Tran arrives at the 92nd annual Academy Awards in February 2020.
Add a photo to this gallery

Retrieved from "https://disney.fandom.com/wiki/Kelly_Marie_Tran?oldid=4504981"
Community content is available under CC-BY-SA unless otherwise noted.