Matthew Mosshart (2011-2014)
Kelly Michelle Lee Osbourne is an English fashion designer, singer, actress, and voice actress. She is the daughter of Ozzy and Sharon Osbourne.

For Disney, she played an alternate version of Dorothy Gale in the extended version of the 2005 musical telefilm, The Muppets' Wizard of Oz. She also hosted the second Phineas and Ferb cliptastic countdown episode. Additionally, she did the voice of Hildy Gloom in the Disney XD animated series, The 7D, which became her debut in voice acting an animated character.

Kelly recording the voice of Hildy. 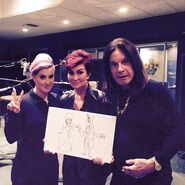 Kelly with her parents, Ozzy and Sharon.
Community content is available under CC-BY-SA unless otherwise noted.
Advertisement