Alexa and Zooey
Kendrick Kang-Joh “Ken” Jeong is an Asian-American stand-up comedian, actor, and physician. He is best known for his film role as Leslie Chow in The Hangover films and for his television role as Ben Chang on the NBC comedy series Community since 2009. He also played Dr. Ken Park in the ABC TV show, Dr. Ken, which he is also the creator, writer, and executive producer of the show.

For Disney, he made a cameo as the "Punch Teacher" host in the 2011 Disney film, The Muppets, played a Doctor in the 2019 live-action adaptation of Lady and the Tramp and played a security guard in Avengers: Endgame. He also played Grover Young in the ABC TV show, The Kids Are All Right. 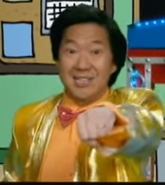 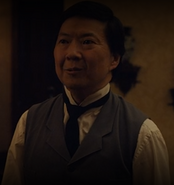 Ken Jeong speaks at the Community panel at the 2011 Winter TCA Tour.

Ken Jeong poses for a portrait at the 2015 Sundance Film Fest.

Ken Jeong speaks at the Dr. Ken panel at the 2015 Summer TCA Tour.

Ken Jeong attending the 6th biennial Stand Up to Cancer event in September 2018.