Georgia Marie Thompson
Kenan Stacy Thompson is an American actor, voice actor, and comedian, who is best known for his work as an original cast member on the Nickelodeon sketch comedy and variety show, All That from 1994 to 1999 and for his current work as a cast member on the NBC late-night sketch comedy and variety show, Saturday Night Live, since 2003. He is also well-known for his other television and film roles, such as Kenan Rockmore on the Nickelodeon teen sitcom Kenan & Kel from 1996 to 2000, Dexter Reed in the 1997 comedy film, Good Burger, Ronald in the 2015 children's television series Nature Cat, the titular character in the 2004 live-action/animated comedy film, Fat Albert, and as the voice of Greedy Smurf in the live-action Smurfs films.

Roy
(Heavyweights)
Add a photo to this gallery 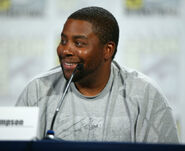 Kenan Thompson attending the 2021 Nickelodeon Kids' Choice Awards.
Add a photo to this gallery
Retrieved from "https://disney.fandom.com/wiki/Kenan_Thompson?oldid=4527795"
Community content is available under CC-BY-SA unless otherwise noted.