Kendall Perkins is the former class president of Kick's class and one of the main antagonists turned anti-heroine in the show like Brad and she's mostly harmless sometimes. She normally dislikes him for his daredevil personality, except in some episodes like in Dancing with the Enemy, and Hand in Hand.

As class president, she holds a great deal of responsibility within the school (that is until "Poll Position" when she loses the class presidential election to Gunther). She is always annoyed by Kick, to which she refers to him by his first name, Clarence. Because she likes elegance, she doesn't break any rules (except in Detained, in which Ms. Chicarelli puts her in detention). To Kendall, elegance and rule-breaking are polar opposites of each other. When she gets really angry, she becomes a very scary girl (nearly a monster) who screams louder than anyone. She comes from a rich family, but doesn't come off as spoiled (except in "Snowpocalypse!", when Kendall gets her father to phone the school when it is snowing). She is simply bossy and a little mean. She is also not too friendly with people whom she considers idiots like Gunther, as seen in "Abandon Friendship!" and "Pinch Sitter".

Ronaldo at the time was her actual boyfriend starting from the episode Frame Story, but it is hinted that she has a secret crush on Kick, which can be seen in many episodes, as in the entire series way before she met Ronaldo. When they're together, Kendall will always begin to warm up to Ronaldo. But once he does something stupid, she usually gets very angry at him and becomes a very scary person.

Kendall may always look like a classy Little Miss, but she is an all-round tomboy; she also has an awesome side like Kick, as seen in "Hand in Hand". She is seen doing stunts with Kick without any fear, and is quick-thinking to hide the fact that her hand is stuck to Kick's. When Brad comes to look for her, looking suspicious of her disguised as Gunther, she lets out a huge fart without feeling panicked or embarrassed, even going so far as to begin to boast about how flatulent she is before catching herself.

She is also shown to be very knowledgeable about technology as she is able to activate Ronaldo's force field without his help in "Stand and Delivery".

Kendall is one of the tallest girls in Mellowbrook Elementary School, along with Jackie Wackerman. Despite her height, she is about the same age as Kick (two weeks older as mentioned in “Pinch Sitter”). She has blonde hair and, like the majority of the characters, has black eyes. Her usual attire consists of a pink and green argyle sweater which she wears over a white shirt with thin blue stripes and a black skirt with white socks and black shoes. On her head, she wears a pink headband. In "Pool Daze", she is seen wearing a green swimsuit with pink and white stripes. In "Gym Dandy" she is seen in her gym uniform and black slippers with white stripes. In "Tattler's Tale" and "Roll Reversal" she is seen wearing a jumpsuit which is very similar to Kick's own. She is also seen wearing sports clothing in the Roller Derby in "Roll Reversal".

Kendall is seen as a "convinced-by-herself" girl because of her school life, her A-, A, A+, S grades and her occupation as class president. She usually dislikes lots of people (like Kick and his friends), which makes her kinda mean and is the reason why she doesn't have many friends. But she, on the inside, has a heart of gold. She can be really sensible, friendly and emotive, but in episodes like "Kick or Treat", she is shown to be arrogant and selfish. However in "Pinch Sitter", Kendall can be quick on her feet and outsmart Kick and Brad when she babysit them. In "Roll Reversal", when she accidentally stepped on Kick's skateboard and did the motocross without the moto, she (even though it was a for a short time) had some friends and feels appreciated for an accomplishment, and since it was originally Kick's stunt, Kendall is in a playful mood while teasingly rubbing her success in Kick's face.

Nevertheless, Kendall can get really angry at times, mainly with Kick or sometimes with Ronaldo. In "Stand and Delivery", Ronaldo makes something stupid for Kendall, making her furious enough that she becomes a very scary girl. Most of the time she can't handle rule-breaking and rebellion (although in "Detained", she reluctantly joins the Blonde Brigade in order to escape detention).

As shown in "Dancing With the Enemy", she is a very talented and fearless dancer, being seen as very agile and strong on stage. And she was able to earn lots of fans because of her impressive and elegant dance abilities.

In "Hand in Hand", her awesome side is discovered. With her quick-thinking and clever ideas, she is able to help successfully keep a lid on her "stuck hands" situation with Kick. Throughout the episode, she is also shown to be a fearless girl, becoming more accustomed to Kick's stunts. But when she gets really upset, she becomes very scary. In "Roll Reversal" Kendall unintentionally outdoes Kick at a Motocross stunt that he is about to perform himself.

Not too much is known about Kendall's early life or of her family. Her father, Mr. Perkins, is an actuary as shown in "Father From the Truth". It is hinted that Mr. Perkins is associated with Mellowbrook Elementary since in "Snowpocalypse!", she wants him to open the school even while it is snowing in Mellowbrook (and he did it). It was also confirmed Kendall has an older sister and although she is mentioned by Kendall in "Pinch Sitter", she won't appear in the show due to its cancellation.

At school, Kendall can be considered a "princess" - she is the class president of Kick's class (until "Poll Position"), often gets almost perfect/perfect marks and is also the first rank student in her class (even smarter than Ronaldo). But despite all this, Kendall can get rather... lonely. She doesn't have many friends, due to her mean and bossy personality. In "Dancing With the Enemy", however, her talent for dancing managed to attract many fans.

Kick and Kendall have been shown to argue many times, and both proclaim to dislike each other intently.

In "Snowpocalypse!", she is able to force Kick and the rest of her classmates to go to school, much to his and their displeasure (their school is the only one on earth without a snow day, thanks to Kendall). However, it has been shown on a few occasions that they seem to have what amounts to a romantic liking for each other.

It is revealed in "Frame Story" that Kendall and Ronaldo are in a secret relationship. Kick discovers this accidentally while claiming that the two are the ones who framed him, noticing that they are both holding hands. Kick manages to swipe a drawing of the two out of Kendall's hand, causing him to get sick and leave the room. Afterwards, Ronaldo is about to read a poem to Kendall about his love towards her, but after he says it is written in only ones and zeros, Kendall calls him the "worst secret boyfriend ever."

It is possible that their relationship might end soon. In "Power Play", Kendall and Ronaldo are leads in a play of the classic Romeo and Juliet. Even though Ronaldo is chosen to play Romeo, Kendall actually wants Kick to play the part. She eventually succeeds in making Kick play the part by pulling out a peg which is holding up a sandbag and causing it to fall on Ronaldo's head.

Their relationship can also be seen in "Stand and Delivery", "Faceplant!", "Hand in Hand", "Detained", "Kick or Treat" and "Poll Position".

It is possible that their relationship has ended off-screen because in "Roll Reversal" he is impressed when Kick inadvertently becomes the smartest student in the class, Kendall is angry with Kick but Ronaldo isn't.

While Jackie sees Kendall as an enemy and rival for Kick's love, Kendall just sees Jackie as an annoyance, and likely doesn't see her as a rival in that way. But in "Roll Reversal" Jackie is her biggest fan.

First Gunther is friendly with Kendall, despite this she sees Gunther as stupid, immature, and annoying. 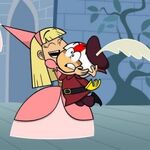 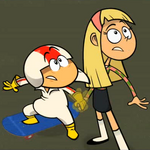