Sir Kenneth Charles Branagh is a Northern Irish actor, director, and producer. He has directed numerous adaptations of Shakespeare's plays, such as Henry V, Othello, Much Ado About Nothing, and Hamlet. His other film credits Mary Shelley's Frankenstein, Wild, Wild West, Harry Potter and the Chamber of Secrets, and voiced Miguel in the 2000 DreamWorks animated film, The Road to El Dorado.

For Disney, Branagh directed the 2015 live-action adaptation of Cinderella and the 2020 film, Artemis Fowl. He also played Herr Knopp and Gestapo in Swing Kids.

Branagh directed the 2011 film, Thor, which served as the fourth film in the Marvel Cinematic Universe. He also did an uncredited voice appearance as the Asgardian Distress Caller at the beginning of Avengers: Infinity War. He will direct the upcoming Fox film, Death on the Nile, in which he will reprise his role of Hercule Poirot from 2017's Murder on the Orient Express. 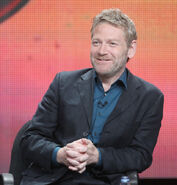 Sir Kenneth Branagh at the premiere of Cinderella in March 2015. 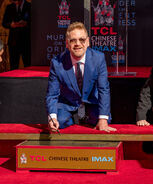