Images of Kerchak from Tarzan.

Kerchak and Kala with their son.

Kerchak smiling at his son.

Kerchak and Kala sleeping with their son

Kerchak and Kala rush to save their son from Sabor.

Kerchak witnessing his child's demise at Sabor's hand, much to his horror.

Kerchak and Kala mourning the loss of their son.

Kerchak is relieved that Kala has returned...

...but is shocked when he sees Baby Tarzan.

Kerchak is surprised by the new arrival.

"Kala, it won't replace the one we lost."

Kerchak disapproves of Kala's decision to adopt Baby Tarzan, because the child is not a gorilla.

"Kala, I cannot let you put our family in danger."

"I said he could stay. That doesn't make him my son."

Kerchak watches over his family, as they sleep.

Kerchak, Kala and the other gorillas before the stampede.

Kerchak sees a baby gorilla in danger from the elephants.

"You almost killed someone!"

"You can't keep defending him."

"He will never learn. You can't learn to be one of us!"

Kerchak being overwhelmed by Sabor

Kerchak being protecting by Tarzan.

"You may be willing to risk our safety, but I'm not!"

Tarzan and Kerchak argue over whether the humans are dangerous.

Kerchak, after Tarzan challenges his authority.

"Protect this family. And stay away from them!"

Kerchak is shocked to see humans with his family.

Kerchak is upset that Kala is saddened about Tarzan's departure.

Kerchak knocks a thug out to protect Tarzan.

Kerchak and Tarzan team up to save the gorillas.

Kerchak after being shot by Clayton.

"Forgive me for not understanding... that you have always been one of us. Our family will look to you now."

Kerchak's death.
Add a photo to this gallery

Kerchak washing in a river

Kerchak rolls his eyes annoyed.
Add a photo to this gallery 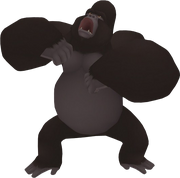 Clip Art of Kerchak (but with brown fur) 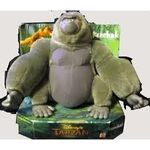 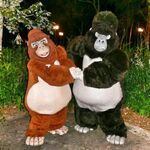 Kerchak with Kala at one of the Disney parks.
Add a photo to this gallery
Retrieved from "https://disney.fandom.com/wiki/Kerchak/Gallery?oldid=4539738"
Community content is available under CC-BY-SA unless otherwise noted.