River Russell Deary
Willa Lou Deary
Third child
Keri Lynn Russell is an American actress and dancer, who was best known for her role as Felicity Porter in The WB/Touchstone Television college drama series Felicity from 1998 to 2002.

For Disney, she was part of The Mickey Mouse Club from seasons 4 to 6 (1991-1994), and played Mandy Park in the 1992 Disney film, Honey, I Blew Up the Kid. She also portrayed Jill Hastings in the 2008 Disney family fantasy-comedy film, Bedtime Stories and Zorii Bliss in Star Wars: The Rise of Skywalker. In addition, she played Sandra in the live action Clerks TV pilot.

Russell's other film credits include Mission: Impossible III, Waitress, August Rush, Extraordinary Measures, Dawn of the Planet of the Apes, and Free State of Jones. Russell also starred as KGB agent Elizabeth Jennings in the FX spy thriller series The Americans (2013–2018), for which she was nominated for Primetime Emmy and Golden Globe Awards. She appeared in other shows, like Boy Meets World, 7th Heaven, Married...With Children, Scrubs, and Arrested Develepoment.

Herself
(The All New Mickey Mouse Club)

Mandy Park
(Honey, I Blew Up the Kid)

Keri Russell at premiere of Bedtime Stories in December 2008. 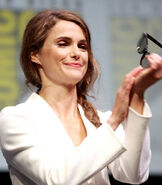 Keri Russell speaks at The American panel at FX portion of the 2016 Winter TCA Tour. 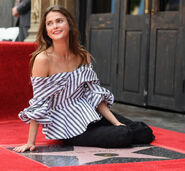 Keri Russell at her Hollywood Walk of Fame ceremony in May 2017.