Kermit's 50th Anniversary World Tour was an event to honor the 50th anniversary of Kermit the Frog that was intended to last a year, during which Kermit would travel to 50 locations across four continents.

The first stop on Kermit's world tour took place on October 14, 2005 in Kermit, Texas. Other stops included the Johnson Space Center in Houston, Texas on October 15, 2005, and Radio City Music Hall in New York City on November 4, 2005. However, due to a shift in management within The Muppets Holding Company, the tour was cut short after the first three stops. 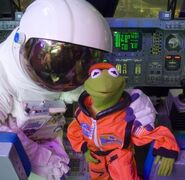 Retrieved from "https://disney.fandom.com/wiki/Kermit%27s_World_Tour?oldid=4007584"
Community content is available under CC-BY-SA unless otherwise noted.