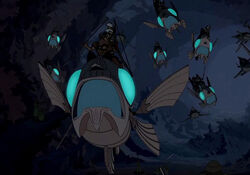 The Ketak is a stone vehicle, carved into the shape of a fish, that is powered by the energy components possessed with the crystal shards from the Heart of Atlantis. They, along with Aktirak and the Leviathan, are the primarily combat machines used during the height of Atlantis to dominate other civilizations. By utilizing the crystal shard's power, Ketaks are able to launch electrical lasers.

Following the events of the Great Flood, King Kashekim Nedakh had all knowledge of the Heart of Atlantis erased and hid it in the Crystal Chamber below his own residence. Over time, the Atlanteans would come to forget not only the purpose for the flying stone fish, but also how to operate them. Soon enough, they would forget about them all together.

When the Whitmore Expedition arrived in Atlantis, Milo Thatch was able to read the instructions on one of the vehicles to activate it. Milo would teach the Atlanteans this knowledge when they are needed to stop Lyle Rourke from escaping with the Heart of Atlantis. During a battle over a dormant volcano, Vinny Santorini would accidentally discover how to discharge an energy blast to contend with the previously superior firearms of Rourke's men. Since the return of the Heart of Atlantis, Ketaks are now in regular use by the Atlanteans once more.