1997-present
Kether Donohue is an American actress and singer. She is known for her role as Lindsay on You're the Worst and cappella leader Alice in the 2012 comedy Pitch Perfect.

For Disney, she voiced Flo in Elena of Avalor.

Kether Donohue speaks at the You're the Worst panel at the 2017 Summer TCA Tour. 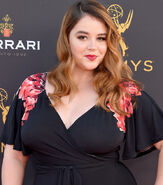 Kether Donohue attending the 71st annual Emmy Awards in September 2019.
Add a photo to this gallery

Retrieved from "https://disney.fandom.com/wiki/Kether_Donohue?oldid=3789395"
Community content is available under CC-BY-SA unless otherwise noted.