Kevin Bishop is an English actor, comedian, writer, and star of The Kevin Bishop Show, which he co-wrote with Lee Hupfield. For Disney, he portrayed the character Jim Hawkins in the 1996 film, Muppet Treasure Island.

First starring in the British children's television drama series Grange Hill, Bishop's second role was Ben Quayle in the television series Silent Witness at age 16. Also playing Stupid Brian in three episodes of My Family, he starred in Muppet Treasure Island as Jim Hawkins. In 2002, he played Dick in the pantomime, Dick Whittington. In 2005, he portrayed the late comedian Dudley Moore onstage in Pete and Dud: Come Again, a drama charting Moore's turbulent relationship with Peter Cook, which debuted at the Assembly Rooms as part of the Edinburgh Fringe before transferring to The Venue in London's West End in March 2006.

In August 2007, Bishop appeared as the title character in Channel 4's satirical spoof documentary "Being Tom Cruise", a spin-off of Star Stories. In September 2014, he appeared in the one-man show Fully Committed at the Menier Chocolate Factory, in which he played forty characters. In 2013, Bishop appeared in the American comedy series Super Fun Night, written by and starring Australian comedic actress Rebel Wilson. The show ran for one season. In August 2016, Bishop starred in the revival of classic 1970s BBC sitcom Porridge.

He played the role of Fletch, grandson of Ronnie Barker's original main character, locked up for cyber-crime. Originally a one-off, the show was commissioned to full series in October 2016. The first series was broadcast in October 2017 on a 6-week run on BBC1 as well as the full series being released at the same time on the BBC iplayer. In 2016 Bishop played Nigel Farage in a one-off BBC2 comedy entitled Nigel Farage Gets His Life Back. In 2017, Bishop became the speaking voice for 2-D, fictional lead singer of British virtual band Gorillaz. 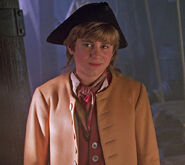