Lucy Webb (1995-2008) (divorced)
Kevin Elliot Pollak is an American actor, voice actor, impressionist, game show host, and comedian. He is well-known for playing Riley and voicing an Alligator in Dr. Dolittle 2. He also voiced Ross in Season 29 of The Simpsons episode "3 Scenes Plus a Tag from a Marriage".

For Disney, he played the roles of Cupid in The Santa Clause 2 and The Santa Clause 3: The Escape Clause, Dr. Robert Coles in Ruby Bridges, Jordan Marcus in Miami Rhapsody, Brad Berman in the 1993 Touchstone Pictures film, Indian Summer, and Spinlok in ExtraTERRORestrial Alien Encounter. He also played Wayne Boggs in the 1999 Miramax comedy She's All That. 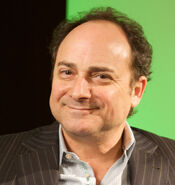