Harley Quinn Smith
Kevin Patrick Smith is an American filmmaker, actor, comedian, director, producer, public speaker, comic book writer, author, and podcaster. He is known for producing the 1994 film, Clerks and its sequel and as Silent Bob in the 2001 comedy Jay and Silent Bob Strike Back (which he also directed).

For Disney, he voiced a Stormtrooper in Star Wars: The Force Awakens, voiced Clive Addison in the Phineas and Ferb episode "Nerds of a Feather", and appeared as a guest star in the Disney+ series, Earth to Ned. He also worked on Touchstone Pictures and Miramax Films films. He made a non-speaking cameo in the animated show What If...?. 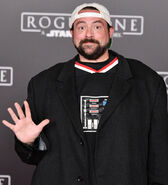 Kevin Smith at premiere of Rogue One: A Star Wars Story in December 2016.