The Grand Canyon and other similar areas

Terra defeats him, but this allows Master Xehanort to take over Terra's body, thus creating Terra-Xehanort. However, Terra's soul finds its way into his discarded armor, creating the Lingering Will. The two fight, eventually ending with the Lingering Will winning by knocking out Xehanort. Meanwhile, Aqua fights Braig to defend a frozen Ventus. After Braig escapes, she is knocked out by Vanitas. Before he can finish her off, Ventus thaws out and fights him. Afterwards, Vanitas shows his true face, identical to Sora's, and forces Ventus to absorb him and both are transported to the Awakening where they have their last battle while Aqua and Mickey are forced to fight Ventus, possessed by Vanitas. Vanitas is defeated in both fights and fades out of existence, and the χ-blade is destroyed, resulting with Ventus losing his completed heart. A huge blast (created by the shattered χ-blade) transports Xehanort to another world and Aqua and Ventus's bodies into the Lanes Between, where they are found and rescued by Mickey. The Lingering Will kneels down, and swears to Aqua and Ven that one day, he will end this conflict.

Although known as an inhabitant of Keyblade Graveyard, Xehanort actually hails from the Destiny Islands.

Master Xehanort specifically chose the Keyblade Graveyard as his headquarters so that he and his twelve counterparts could fight the Seven Guardians of Light. It was the location of the final battle between good and evil.

Sora and the Seven Guardians of Light arrived, where they encountered Master Xehanort himself. He explains to them about the necessity to restart the Keyblade War in order to build the x-blade. Xehanort and his allies summoned an army of Heartless, Nobodies, and Unversed to stall the heroes. Once the enemies were vanquished, the Guardians of Light continued on.

Sora assisted his friends into fighting the Organization members, slaying them down one by one. Once Xehanort was left, Sora faced him. Xehanort had Kairi hostage and struck her in pieces. The villain was able to summon Kingdom Hearts, but the Guardians of Light were able to send him to Scala Ad Caelum, where Sora faced Xehanort in a final showdown. Once the battle was over, Sora used the power of awakening to find Kairi, while the Guardians of Light departed to their own lives.

In the Aftermath, Xigbar is revealed to have survived the battle, identifying himself as Luxu. He meets up with the Foretellers, as they surrounded the Black Box, with Pete and Maleficent in the background.

Aqua in front of a crater created during the Keyblade War

Remnant of the Keyblade War

Another crater, which forms a Hidden Mickey 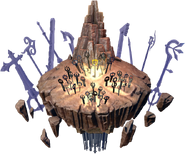