Sarah Sutherland
Kiefer William Frederick Dempsey George Rufus Sutherland is an English-Canadian-born American actor, voice actor, producer, and director who is best known for his role as Jack Bauer on the Fox serial drama series 24 from 2001 to 2010. He also provided both the voice, facial, and partial body capture to Big Boss and Punished "Venom" Snake in both Konami's Metal Gear Solid: Ground Zeroes and Metal Gear Solid V: The Phantom Pain. He is the son of Donald Sutherland.

He played Athos in the 1993 Disney film, The Three Musketeers and voiced Samson in the 2006 Disney animated film, The Wild. Genie was once seen transforming into the 3 Musketeers, including Athos in an Aladdin episode. He also played Tom Kirkman in the ABC/Netflix television series Designated Survivor.

Samson
(The Wild)
Add a photo to this gallery 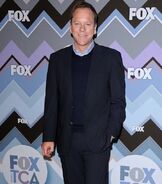 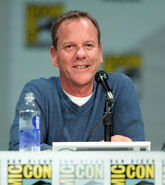 Kiefer Sutherland speaks at the Designated Survivor panel at the 2016 Summer TCA Tour.

Kiefer Sutherland speaks onstage at the 68th annual Emmy Awards in September 2016.
Add a photo to this gallery

Retrieved from "https://disney.fandom.com/wiki/Kiefer_Sutherland?oldid=4147672"
Community content is available under CC-BY-SA unless otherwise noted.