With Brinson:
Brooke Brinson
With Davis:
Whitney Davis
Chad Davis
With Jackson:
Kimberly Richards
Kimberly "Kim" Richards is an American actress, former child actress, and television personality who played many roles in The Wonderful World of Color, including, a girl outside the mayor's office ("Strange Monster of Strawberry Cove"), Daphne "Daffy" Fernald ("The Whiz Kid and the Mystery at Riverton" and "The Whiz Kid and the Carvial Caper"), Sara Melborne ("Hog Wild"), and Leroy McClaren. 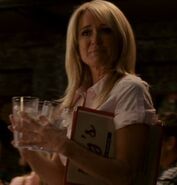 Tina in Race to Witch Mountain
Add a photo to this gallery
Retrieved from "https://disney.fandom.com/wiki/Kim_Richards?oldid=4126390"
Community content is available under CC-BY-SA unless otherwise noted.