William and Jasper
Kimberly Williams-Paisley is an American actress and voice actress.

For Disney, she played Annie Banks-MacKenzie in the 1993 Touchstone Pictures film, Father of the Bride and its sequel, Gwen Daugherty in Indian Summer, Karen Collier in the 1996 film, The War at Home, Dana in According to Jim, and Peggy Kenter in Nashville. She was also the English voice of Fio Piccolo in Disney's 2005 dub of Porco Rosso. 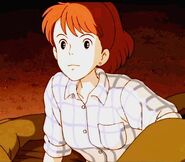 Kimberly Williams-Paisley in June 2008
Add a photo to this gallery
Retrieved from "https://disney.fandom.com/wiki/Kimberly_Williams-Paisley?oldid=3780026"
Community content is available under CC-BY-SA unless otherwise noted.