John Christian Walker (2003-2004)
Kimberly Anne "Kimmy" Robertson is an American actress and voice actress. Her Disney roles include Alana, Adella, Arista, and Andrina in The Little Mermaid (and its television spin-off), Gloria Forrester in Honey, I Shrunk the Kids, Fifi in Beauty and the Beast (and its sequel Beauty and the Beast: Belle's Magical World), Feather Duster in the House of Mouse episode "Goofy's Valentine Date", and Gwen Mezzrow in Pepper Ann.

She is best known for her role as Lucy Moran in the TV series Twin Peaks. Her high-pitched voice has led to roles in animated series such as Batman: The Animated Series, The Critic, The Tick, The Simpsons, Batman Beyond, and 2 Stupid Dogs. She also appeared in other live-action show such as Webster, Perfect Strangers, Married...with Children, Tales from the Crypt, The Louie Show, Drake and Josh, and ER.

Robertson performed a short spoken-word segment on Roger McGuinn's 1990 album Back from Rio. In 2011, she started playing Penny Wise on the long-running radio series Adventures in Odyssey. 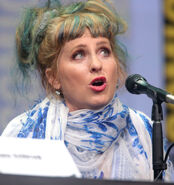