This article is about the character Arthur from Gargoyles. For other characters, see Arthur.

King Arthur Pendragon is one of Britain's most famous kings. This version of him is featured in the Disney animated series, Gargoyles.

King Arthur was introduced into Gargoyles as part of an ambitious, but ultimately unrealized plan to establish a series of spinoffs to Gargoyles that would build the franchise into Disney's own superhero universe. Arthur's planned spin-off Pendragon, would focus on Arthur and Griff's adventures around the world searching for Merlin and questing for the Holy Grail. According to Greg Weisman, this would eventually culminate in Arthur being recognized as the true King Arthur by various world governments and establishing a technologically advanced New Camelot in Antarctica with the help of various allies he made along the way.

Arthur became the High King of Britain on September 29, 500 after pulling out Excalibur. He was mortally wounded in 542 and sent to a magic hill on Avalon, where he slept for 1,453 years, when he was awakened by Elisa Maza.

On Avalon, he helped battle the Archmage, and decided to explore the modern world on his own. He eventually wound up in England, where he broke into Westminster Abbey, thereby attracting the attention of the gargoyle, Griff. With the help of Griff and the Manhattan Clan, King Arthur reclaimed Excalibur, despite Macbeth's attempt to claim the sword for himself. He then made the decision to go and search for Merlin, as well as find a way to return Griff to London, England. However, Griff wished to accompany him, so King Arthur knighted him.

When Arthur heard that England was returning the Stone of Destiny to Scotland, he and Griff returned to London to protect the stone on its journey. 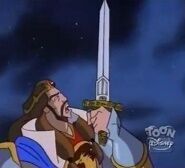 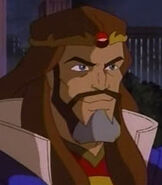