Father, Dad, Old Brooding Armour Guy (by Eugene)
Your Majesty (by Quirin, Adira and Rapunzel)
The King (by Hector and Sideburns)
Creepy Guy (by Lance)
Old Pile of Bones (by himself)

Burly with a missing right arm.

King of the Dark Kingdom

Ravens, father-son bonding, stories, "The Tales of Flynnigan Rider" books, being able to keep his thoughts to himself, spending time with his son

Black rocks, losing his son, Zhan Tiri, not being able to keep his thoughts to himself

"I can tell a lot by looking into a man's eyes!"
King Edmund is a character in Rapunzel's Tangled Adventure. He is the ruler of the Dark Kingdom and the long-lost father of Eugene Fitzherbert.

Edmund comes from a long line of monarchs and warriors that have sworn to protect the world from the Moonstone Opal, a powerful stone created by a single drop of moonlight that harnesses the power of death and destruction. When Edmund assumed the throne, he also assumed the destiny of his ancestors by devoting himself to keeping the Moonstone's power at bay. In the midst, Edmund's wife gave birth to a baby boy, Horace. During Horace's infancy, Edmund grew tired of the damage caused by the Moonstone and tried to destroy it once and for all. However, upon doing so, the Dark Kingdom was nearly destroyed in a catastrophic event that killed his wife. Riddled with guilt and determined to keep his surviving subjects safe, Edmund ordered for a kingdom-wide evacuation. Horace was taken away by a servant woman and placed in an orphanage. Edmund sent ravens to watch over his son, but eventually, they lost track of him, but they would bring Horace's childhood toys and wanted posters to comfort him. In that time, Horace was renamed Eugene.

Meanwhile, Edmund's most trusted warriors (Quirin, Adira, and Hector) formed a group known as the Brotherhood that was sworn to keep all away from the Moonstone. Edmund, meanwhile, remained in the Dark Kingdom to keep the stone's magic out of the wrong hands.

When Rapunzel's party arrived in "Destinies Collide", Edmund tried to send the group to their doom, by cutting the line to a gondola carrying them. He stopped himself from killing his son when he realized who he was because of his eyes. Happy to be reunited with his son, he explained to him the legacy of the Dark Kings in keeping the Moonstone's power in check, revealing how it killed his wife in an effort to show why Eugene couldn't let Rapunzel near it.

Later in a climactic battle with his ancestors, he was asked by his son to have faith in Rapunzel. He helped defeat the ghost of his ancestors and allowed Rapunzel, Eugene, and Cassandra inside the moonstone room in hope to end destruction for once and all.

Unfortunately, Cassandra took the Moonstone, fused with it, and ran away. Edmund tried to talk to Eugene before Rapunzel and the team went home to save Corona.

In "Return of the King", Edmund arrived in Corona and attempted to give his son a family heirloom, a sash with the kingdom's symbol. However, it got stolen and a ransom for gold was asked for it. Along the way to the ransom's destination, Edmund tried to spend some time with his son and it was later revealed that they both like The Tales of Flynnigan Rider. However, their bonding moment was cut short by the Stabbington Brothers' attack and Eugene discovered that Edmund was the one who took the sash in order to spend some time with him. Eugene angrily gave the sash back and headed towards home.

Edmund soon got captured by the Stabbington Brothers as bait for Eugene and when his son came, they apparently crushed him with a rock. But Eugene managed to survive and learned that his father had kept tabs on him by hanging on to his old toys. Then Rapunzel came to get Eugene free and help him rescue his dad. They managed to avoid getting crushed, but lost the sash in the process. However, Edmund made a new sash for Eugene, with the colors of the Flynnigan Rider books, as a gift. 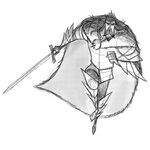 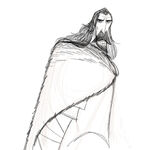 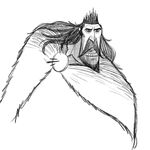 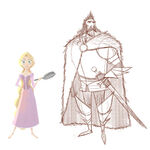 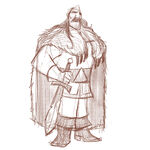 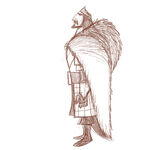 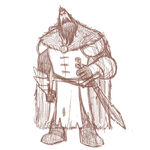 Seeing his baby son off

"This is kind of an off day for me, this doesn't normally happen."

A portrait of Edmund with his wife

"Such pluck at the face of adversity. She'll certainly make an excellent daughter-in-law one day!"

Retrieved from "https://disney.fandom.com/wiki/King_Edmund?oldid=4327478"
Community content is available under CC-BY-SA unless otherwise noted.