His people, his home

King Eidilleg is the king of Fair Folk in Disney's 1985 animated feature film, The Black Cauldron. He is voiced by Arthur Malet.

King Eidilleg is a benevolent ruler, and always accommodating to guests, even though he has Doli construct a system intended to keep humans out of his kingdom.

King Eidilleg, meets Taran and his friends, Princess Eilonwy, Fflewddur Fflam, and Gurgi when the latter landed in the underground after being sucked up by the water of a pond. The King was supervising his right-hand man Doli, who was repairing the scaffolding of the whirlpool, and the work was interrupted by the arrival of Taran and his fellas. After Doli revealed that Hen Wen, the pig, had arrived among the Fair Folk, to Taran's great joy, the King asked his lieutenant to go get him. He asks humans what is happening on the surface. Taran reveals the intentions of the Horned King, that if he gets his hands on the black Cauldron, everyone will be condemned. The King reassures the humans that the Cauldron is well guarded by the Witches of Morva, so Taran decides to go there to destroy the Cauldron so that the Horned King cannot use it. The King then asks Doli to escort the humans to Morva and orders his people to bring the humans back to the surface, while he and the other elves bring Hen Wen to Dallben. 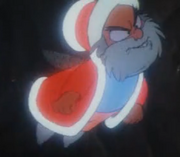 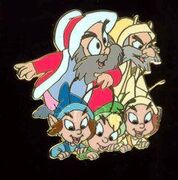