Marquis de Bouillabaisse
King Jean-Claude is a character who appears in the TV Series Adventures of the Gummi Bears.

He is Princess Marie's father, whom he is very proud of. His kingdom is unnamed, though it is appears to be Frankish in nature as opposed to the Britannic basis for Dunwyn. His kingdom is under siege by a rebel group commanded by the Marquis de Bouillabaisse, a mirror image of how Dunwyn is threatened by Duke Igthorn.

He does seem snooty in nature, such as when King Gregor marveled at a tapestry Marie had presented as a gift, Jean-Claude did not seem to show the same respect for a bird statue given to him in return. However, he kept his thoughts to himself and showed public gratitude to Calla. When the truth is shown that Marie has been really rude and obnoxious to Calla, King Jean-Claude does not put up with that behavior and humbly apologizes to Gregor for the trouble. 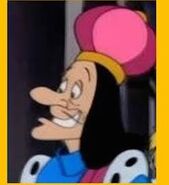 Retrieved from "https://disney.fandom.com/wiki/King_Jean-Claude?oldid=4100460"
Community content is available under CC-BY-SA unless otherwise noted.