Father, Papa (by Agnarr)
Grandfather (by Elsa and Anna)

To eliminate the Northuldra and all who use magic (failed)

Power, tea, respect, getting his way

Magic, the Northuldra, disrespect, not getting his way

His sword and shield

"You see, the dam will weaken their lands, so they will have to turn to me."

“Magic makes people feel too powerful, too entitled. It makes them think they can defy the will of a king!”
―Runeard voicing his disapproval of magic.[src]

King Runeard is the main antagonist of Disney's 2019 animated feature film, Frozen II. He was the ruler of Arendelle, and the father of King Agnarr. In his lifetime, Runeard was revered as a noble and generous leader. In truth, however, he was a ruthless tyrant who believed magic to be a threat to his kingship. In his attempt to eliminate the Northuldra, Runeard sparked a decades-long catastrophe that was then left to his granddaughters, Anna and Elsa, to rectify.

Runeard is the oldest known monarch and founder of Arendelle.[2] At some point, he arranged to be married to a woman from another kingdom named Rita, who became Arendelle's queen upon their marriage. The couple had one son and heir named Prince Agnarr, and Runeard oversaw the construction of Arendelle Castle when Agnarr was a child.[3]

However, while Rita loved Agnarr very much, she was completely cut off from her home country and subsequently became very homesick. Furthermore, even though Runeard showered her with all sorts of lavish gifts and material possessions, he never gave Rita actual love and affection.[4][5] Over the years, Rita longed for freedom and her home so much that she grew increasingly depressed, eventually to the point that she would stay in her room and lie in bed all day, crying.[4] In response, Runeard only grew impatient with her, as he didn't understand why she would be sad when he had given her everything she could possibly want.[4][5] When Agnarr was five years old,[6] Rita could no longer take living with Runeard, so she sought out the trolls and begged their leader, Pabbie, to erase her memories of her marriage and family so she could entirely forget her life in Arendelle.[4] She had wanted to take Agnarr with her, but realized that doing so would lead to Runeard coming after them, possible even starting a war against her kingdom, which would lead to many people dying and Agnarr's life being put in danger, just to bring Agnarr back.[4] With all the potential negative consequences in mind of what could happen if she left with Agnarr, Rita decided that he had to remain in Arendelle, and she had Pabbie erase her memories of him just so she would have the strength to leave him behind.

After having her memories wiped, Rita fled Arendelle entirely, and Runeard officially blamed her disappearance on evil spirits.[6] This was only one of the many instances of Runeard scapegoating magic, fostering widespread xenophobia towards its users in his kingdom.[7] Intent on forgetting about Rita and unwilling to accept that he was the only reason why she left him, Runeard hid away all of her belongings and forbade anyone to speak of her; anyone who mentioned Rita, including speaking her name, would be immediately banished from Arendelle.[5][8]

Sometime after he began his reign as king of Arendelle, Runeard and the Arendellians made peace with the Northuldra, a northern tribe that resided in the Enchanted Forest along with the elemental spirits of earth, wind, water, and fire. This allegiance was a ploy, however, as Runeard secretly feared the Northuldra due to their association with magic. He declared that they couldn't be trusted and orchestrated a plot to eliminate the tribe.

In the Forest, Runeard commissioned the construction of a dam, which was gifted to the Northuldra as a peace offering designed to bring prosperity to their land. In truth, the dam would weaken the Northuldra’s resources and—in their desperation—force them to be susceptible to Runeard. Upon realizing the damage being brought upon by the dam, the leader of the Northuldra consulted Runeard, who offered to heed the leader’s pleas in private. Once alone, Runeard murdered the Northuldran leader in cold blood. This sparked a war between Arendelle and the Northuldra, during which Runeard fell off a cliff to his death while fighting a tribe member. The conflict between Arendelle and the Northuldra angered the spirits, who turned against humanity. In their wrath, the Enchanted Forest was encapsulated within an impenetrable mist that prevented anyone from leaving or entering.

In the decades following Runeard's death, conflicting information spread regarding the origins of the war. The Arendellian citizens believed that the Northuldra were the enemy, and that Runeard was brutally killed in cold blood. The truth wouldn't be discovered until over thirty-four years later by Runeard's granddaughters, Elsa and Anna, under the guide of the spirits.

At first glance, Runeard presents himself as a calm, collected, and upright person who cares about his people and family, and was willing to treat the neighboring Northuldrans as equals. Unbeknownst to the rest of the Arendellians (including Lieutenant Mattias and Agnarr), Runeard is vile, selfish, xenophobic, bigoted, power-hungry, cold-hearted, and merciless to anyone who wasn't within his power. These traits ultimately became his undoing as well as negatively affecting his kingdom and his entire bloodline.

The junior novelization and Dangerous Secrets expands on this. Runeard did not have a close, loving relationship with his wife, Rita, or with his son, Agnarr, and only saw them as assets to his royal rank and their kingdom. He and Rita, who was a princess from another country, were in an arranged marriage, which Runeard had organized just to increase his political status and power. The only kindness he offered Rita was giving her many material possessions, but he became annoyed and impatient with her when she became depressed over missing her home kingdom and longing for freedom from their marriage. When Rita finally broke down and fled upon having her memories of her life in Arendelle erased by Pabbie, Runeard selfishly refused to accept that he had been a bad husband and was solely responsible for her leaving him. He subsequently locked up all of Rita's things, and anything else that reminded him of her, and created a harsh decree against mentioning of her name, which had a penalty of immediate banishment.

Runeard was also cold, dismissive, and unloving towards Agnarr. After Rita left, he told the then five-year-old Agnarr that she was gone, and he constantly chided his son for crying over her absence all the time. Years later, Runeard berated Agnarr for exploring the Enchanted Forest and being fascinated by magic before he abruptly brushed him off without accepting the latter's apologies or saying goodbye. Runeard only saw Agnarr as a means of indoctrination, as evident in the prologue where he orders Agnarr to stand tall in his posture in hopes of Agnarr becoming the same cold, pragmatic man that he himself was. He did not prize Agnarr as his child and did not want to be a real father to him, so he instead frequently assigned Agnarr to Lieutenant Mattias to keep him out of his way.

Runeard successfully managed to instill some of his xenophobia into the mind of Agnarr, who would grow up to see the Northuldrans as a hostile people, and who wanted to keep Elsa's magic subdued and hidden from the populace at all costs. Runeard serves as a darker reflection of what his older granddaughter Elsa could have become if she had allowed her fear to consume her, had it not been for her younger sister Anna and Olaf during the eternal winter.

“You see, the dam will weaken their lands, so they will have to turn to me.”
―King Runeard plotting against the Northuldra[src]

Runeard first appears during the prologue, when Agnarr recounts the war that cursed the Enchanted Forest. Agnarr recalls watching his father fall to his death, unaware that Runeard was the cause of the conflict.

Thirty-four years later, Runeard's granddaughters, Elsa and Anna, accompanied by Olaf, Kristoff, and Sven, journey to the Enchanted Forest after Elsa accidentally awakens the spirits, who then wreak havoc on Arendelle. While fighting the Wind Spirit (later named Gale) with her icy magic, Elsa sees vague, misty glimpses of the past, including Runeard's arm swinging his sword (with Runeard roaring in rage) followed by Runeard himself stating: "For Arendelle."

Elsa and her party encounter the trapped Northuldra and Arendellians who, like Agnarr, are unaware of what truly caused the war that doomed their land. Elsa is eventually driven to seek out the fabled river Ahtohallan for answers. While traversing its caverns, Elsa is able to analyze numerous visions of Arendelle's past, including those involving Runeard. She discovers his fearful dislike of magic, as well as his plot to control the Northuldra.

With these findings and showing nothing but outrage towards her late grandfather for his treacherous actions, Elsa sends a message to Anna in the form of an ice statue, which sculpts Runeard sneaking up behind the unarmed Northuldra leader and murdering him in cold blood. Deducing that Runeard was the culprit behind the war, and also seeing how heinous their grandfather was, Anna realizes that she must destroy the dam to free the Forest and restore peace to Arendelle. By provoking the Earth Giants, Anna is attacked by staggering boulders. She lures the giants to the dam, where their boulders successfully destroy the structure. This causes a massive wave to hurl towards Arendelle, but Elsa is able to block the waters before it can destroy the kingdom. With the dam gone, and the truth revealed, peace is restored between Arendellians and the Northuldra, and among the spirits, thus putting an end to Runeard's legacy, forever destroyed by his murderous actions, for good.

Runeard with Agnarr, Lieutenant Mattias, and the rest of the troops

Elsa seeing a projection of Runeard in Gale's tornado

Elsa coldly staring at Runeard as she abandons whatever respect she had for him due to his ruthless, bigoted nature

Concept art portrait of Runeard from The Art of Frozen II

Image of Runeard from The Magical Guide 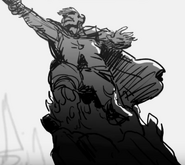 Retrieved from "https://disney.fandom.com/wiki/King_Runeard?oldid=4398610"
Community content is available under CC-BY-SA unless otherwise noted.