King Triton's Carousel of the Sea

King Triton's Carousel of the Sea

Jessie's Critter Carousel
King Triton's Carousel of the Sea was an attraction in Paradise Pier at Disney California Adventure hosted by King Triton from The Little Mermaid.

Unlike the horse arrangement of the King Arthur Carrousel in Disneyland, it featured two undersea chariots and 56 sea creatures native to the Pacific Ocean and California coast such as seahorses, flying fish, whales, dolphins, sea lions, otters, and garibaldis. Purists will point out that it was misnamed, as any carousel that features animals other than horses is called a merry-go-round.

Because of the park's renovation, it was closed until May 2009 for new canopies. There were plans for a new color scheme that would've fit with the Victorian Boardwalk style retheming of the area, but they were canceled to save money for other updates.

After its retheming to Jessie's Critter Carousel as part of Paradise Pier being rethemed as "Pixar Pier", one of the dolphins from it found its way to Disney's Paradise Pier Hotel as a display piece in the lobby.

The carousel at night 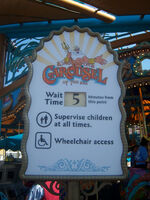 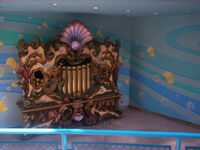 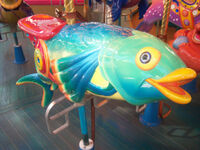