This article is about the sisters of Ariel. For the song, see Daughters of Triton.

The Daughters of Triton

The Seven Princesses of Atlantica (commonly referred to as the Daughters of Triton) are the daughters of King Triton and Queen Athena, debuting in the 1989 Disney animated feature film, The Little Mermaid. 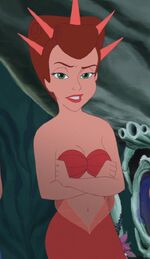 Attina is the firstborn daughter of King Triton and Queen Athena. Her age causes her to feel a certain sense of responsibility for her sisters. She is described by her sisters in that film as being bossy, but ironically, she herself is often bossed around when her siblings outvote her. In the books, she is a bookworm and a writer has a pet catfish named Fin-Fin.

She has been voiced by an unknown actress in the original film, Kath Soucie in the TV series, Kari Wahlgren in Ariel's Beginning, Christie Houser in Kingdom Hearts II. and portrayed by Yoori Kim in The Wonderful World of Disney: The Little Mermaid Live! 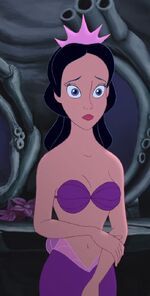 Alana is the second born princess of Atlantica depending on which source material is used. Her hair decoration is similar to a crown, and like Attina's and Triton's, has five points, although in a different style, representing that she is currently next in line to the throne after Attina. She appears to be the one who is most interested in beauty and health. She speaks of her looks often, but she is, by no means, selfish or vain. 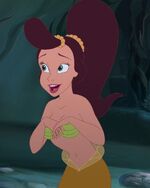 Adella is the third daughter of King Triton and Queen Athena. In the prequel film, she is boy-crazy and wishes to dance with, and later kiss a boy. For some reason, she has also gone through a transformation in her life - in her early years, she was shapely and thin. After her father reinstated music, she gained a little weight, as seen in the TV series. However, in the sequel film, she appears to have lost the weight she gained. In the prequel, she states she is 2 years older than Ariel, putting her birth order at odds with this statement. In the end of Ariel's Beginning, she got to kiss a merboy she liked named Stevie.

She has been voiced by Sherry Lynn in the original film, Kath Soucie in the TV series, and Tara Strong in Ariel's Beginning. 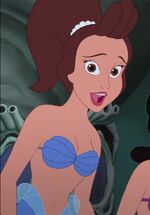 Aquata is the fourth daughter of King Triton and Queen Athena. She is the most obsessive-compulsive of her sisters - when Arista borrowed her things, including her hairbrush, her "lucky" seashells, her pillow, and her stuffed seahorse, Mr. Fuzzyfinkle, she displayed frustration and some hostility, and an impulse to get her things back immediately. She isn't a good dancer, even saying herself that she looks "like a spastic piece of kelp." Her sisters encourage her to dance anyway, and she grows more confident (but not any better at dancing), even starting a conga line at the end of Ariel's Beginning. The original comics denote her as the oldest sister, as she mentions being nervous about becoming queen.

She is voiced by an unknown actress in the original film, Mona Marshall in the TV series, Grey DeLisle in Ariel's Beginning, and was portrayed by Melanie Moore in The Wonderful World of Disney: The Little Mermaid Live!. 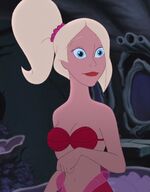 Arista is the fifth daughter of King Triton and Queen Athena. She wears her hair in a ponytail similar to Aquata's, although their bangs are different. She tends to take a lot of Aquata's things in Ariel's Beginning. In her television appearances, she tended to be jealous of Ariel's adventurous ways and joined her youngest sister on adventures. Based on the prequel film Ariel's Beginning, she is the most energetic one, though she adopts a more by-the-rules personality, by the time of the TV series, as shown in the episodes "Against the Tide" and "Beached". Although, in the latter, a small bit of her energetic side surfaces again to help Ariel stop thieves from robbing the Royal Treasury.

She is voiced by an unknown actress in the original film, Mary Kay Bergman in the TV series, Grey DeLisle in Ariel's Beginning, and was portrayed by Tiffany Daniels in The Wonderful World of Disney: The Little Mermaid Live!.

Andrina is the sixth daughter of King Triton and Queen Athena based on differing source materials. She appears to be the joker of her sisters, as seen by her many jokes in the prequel film.

She is voiced by an unknown actress in the original film, Catherine Cavadini in the TV series, Tara Strong in Ariel's Beginning, Susan Steven Logan in Kingdom Hearts II, and Mandy Gonzalez in The Wonderful World of Disney: The Little Mermaid Live!.

Ariel is the seventh daughter of King Triton and Queen Athena. She is adventurous and curious, especially about human things. She also enjoys music and singing, but can sometimes forget about responsibilities she has. She can also be easily distracted. She is the only princess of Atlantica without any specific hair accessory. She is the youngest one and the first to become a mother in her later years after being married to her prince. She is the 4th official Disney Princess.

Attina, Alana, Adella, Aquata, Arista, and Andrina first appear in the original film, introduced during the "Daughters of Triton" sequence. They perform in the concert that Sebastian is putting on that will be the musical debut of their youngest sister, Ariel. However, much to their shock and embarrassment, Ariel fails to show up, resulting in the concert being ruined. Later in the film, they are the first to notice Ariel's unusual happy behavior, with all of them quickly realizing that their younger sister has fallen in love (unaware at the time that she has fallen in love with a human named Eric), believing that the person Ariel has fallen in love with is a merman. At the end of the film, they are last seen attending Ariel and Eric's wedding as Andrina and Aquata wave goodbye to Ariel.

The Little Mermaid: The Series

Just like in the original film, Attina, Alana, Adella, Aquata, Arista, and Andrina have minor roles in the prequel series; however, in some episodes, Alana and Arista respectively are supporting characters.

The Little Mermaid II: Return to the Sea

Attina, Andrina, Aquata, and Adella have minor roles in the 2000 direct-to-video sequel, as they all attend their newborn niece, Melody's christening. Alana and Arista are not seen in the film but it is likely that they have attended the christening (off-screen).

After the defeat of Ursula's sister Morgana, Andrina is the only one of Ariel's sisters to be seen at the end of the film.

In the prequel film, Attina, Alana, Adella, Aquata, Arista, and Andrina all have much larger roles, after their mother, Queen Athena is killed in an accident, they are all raised very strictly by their governess, Marina Del Rey. When Attina and her sisters discover that Ariel has been sneaking off to a forbidden music club, Attina and the other girls join her the next night.

Mistress of All Evil: A Tale of the Dark Fairy

With the exception of Ariel, the six older daughters appear in the third chapter of Serena Valentino's fourth novel. They are shown attending Ursula's funeral, under orders from their father (who wanted to make sure Ursula was given a proper burial).

In this storyline, when Triton was captured by Ursula and a voiceless Ariel returned to Atlantica with the trident, her sisters made her take on the role of Queen in Triton's absence, officially as a punishment for her role in Triton's 'death' but in reality because none of them wanted the responsibility. However, after Ariel regains her voice and learns that Triton is still alive, Attina, her eldest sister, accepts that her actions were unfair, and agrees to take on a role as regent once Triton returns so that Ariel can explore her new position as ambassador to the surface world.

While played very similar to the original film, the musical slightly expands the sisters' roles with the additional fact that Ariel is Triton's favorite daughter, due to her resemblance to their late mother and inheriting her beautiful voice, though he never outright admits it. This adds a sense of envy to the sisters, yet they all do show that they still love Ariel, and Triton continues to show he does indeed love all his daughters very dearly, despite his favoritism towards his youngest. The group is also granted a new signature song, "She's In Love", which they share with Flounder.

King Triton's Concert is a stage show in Tokyo DisneySea's Mermaid Lagoon Theater. In the show, they appear alongside Ariel and her friends on circular projection screens where they can be seen dancing and singing along to the music.

"It's a Small World"

Attina and Andrina can be seen in the Disneyland and Hong Kong Disneyland versions of it's a small world. In the California version, they can be seen right as you pass into the tropical area, floating and singing alongside Ariel and Flounder. In the Hong Kong version, they can once again be spotted in the tropical area, right behind Nemo and Dory from Pixar's "Finding Nemo". Andrina can also be seen in the animated series in the episode Tropical Hideaway.

Attina, Andrina, Aquata and Adella in The Little Mermaid II: Return to the Sea 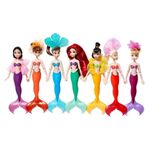 A doll set including each of Triton's daughters

Mersisters and Flounder on Broadway
Add a photo to this gallery