Sora, Donald, and Goofy walk down a long path that seemingly goes nowhere. They see Pluto and start to follow him. He leads them to a series of crossroads. While deciding which path to take, a mysterious man in a black cloak approaches Sora and speaks to him, but at that moment, his words are incomprehensible. The path becomes one and leads them to Castle Oblivion. The cloaked man appears as they enter the castle and gives them a card. They use the card to proceed through the castle. The first world they go to is Traverse Town, where they discover that Leon, Aerith, Yuffie, and Cid have forgotten all about them, yet they strangely remember Sora's, Donald's, and Goofy's names, where Yuffie comments, "You're not in my memory, but my heart remembers you." After Leon gives Sora a tutorial on fighting and gives Sora a Simba summon card, they leave Traverse Town.

The man appears once more after they arrive on the next floor. Another cloaked man appears and introduces himself as Axel. Sora battles him, and when Axel is defeated, he gives him more cards, disappearing soon after. Sora, Donald, and Goofy go through each floor, experiencing their memories, all of which are somehow distorted, each in a different way. They start to lose their memories. A Nobody named Naminé begins to replace memories of Kairi with fake ones of herself. It turns out she is good and is manipulating his memories under the orders of the head of the castle, Marluxia. This escalates to a final battle in the end, for Sora's life, and Naminé's freedom.

Meanwhile, Riku awakens down in the castle, and as he goes up the basement levels of Castle Oblivion, he must take control of the inner darkness inside of him, dealing with Ansem, the Riku Replica, and three members of Organization XIII; Vexen, Lexaeus, and Zexion, along the way.

Kingdom Hearts Re:Chain of Memories is a full remake of Kingdom Hearts: Chain of Memories. It was first released on March 29, 2007, in Japan, and imported to North America almost two years later, on December 2, 2008. It shares the same storyline as Chain of Memories, but features voice-acting and three-dimensional computer-rendering for the PlayStation 2 in the same style as the other released entries in the series, along with all-new cards and cutscenes.

The game's card system and overall plot remained the same as the original Kingdom Hearts: Chain of Memories, and "Simple and Clean" is the game's theme song. 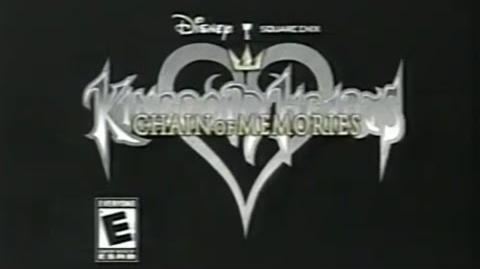