“What mattered the most was remembered the least.”
―Tagline

Kingdom Hearts 358/2 Days (read "Kingdom Hearts Three-Five-Eight Days over Two") is an RPG developed by Square Enix for the Nintendo DS, with aid from h.a.n.d. It focuses on the life of Roxas between the end of Kingdom Hearts and the beginning of Kingdom Hearts II, exploring the time from Roxas' creation until his confrontation with Riku that leads to his placement in the simulated Twilight Town. 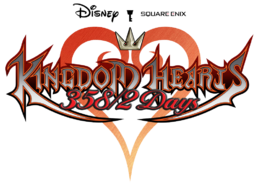 ﻿"Pinocchio's World" was originally plan to appear in Kingdom Hearts 358/2 Days, but was eventually removed due to space restrictions. Tetsuya Nomura explained that the planned plot for the world was, "Set in a circus and playing off the story of Pinocchio, a puppet with a heart, and the Nobodies who possess no heart, we planned for a sad episode with Roxas and Xion looking for hope for themselves." The world would have included Pinocchio (as a human) and Geppetto, as well as the villains Honest John and Gideon from the original film. The profile sprites for the characters still appear within the final game's code.

Hades and Megara were also planned to appear in Olympus Coliseum, and Tinker Bell was apparently planned to have lines, before she was made mute. These characters' profile sprites also appear within the final game's code.

﻿Like previous Kingdom Hearts titles, Kingdom Hearts 358/2 Days features numerous Disney characters. All Organization XIII members are playable in multiplayer mode, as well as Riku, Donald, Goofy, The King, and Sora. Xion, the elusive fourteenth member of the Organization, has great significance in the story. The Heartless appear as the primary antagonists, including a large amount of new types. Also, some special Heartless appear as normal encounters, such as the Possessor in Beast's Castle. There are many old bosses seen like Guard Armor and Darkside. Moogles also appear in the game, they themselves wearing Black Coats. Pete is featured only in Agrabah and Neverland. However, with the exception of the aforementioned Moogles, there are no other Final Fantasy characters in the game.

The game covers the story of Roxas before the events of Kingdom Hearts II. On the day he is born as Sora's Nobody when Sora transforms into a Heartless in the original Kingdom Hearts, Roxas is found by Xemnas in Twilight Town, the leader of Organization XIII, who names him its thirteenth member. Each day he is sent on missions to other worlds, either alone or accompanied by his fellow members, to destroy Heartless with the Keyblade and release captive hearts, with which the Organization can fulfill their goal of summoning Kingdom Hearts and become complete beings. Roxas is placed under the care of Axel, who he befriends and spends his spare time with at the end of each day, sitting atop the clock tower in Twilight Town, speaking about whatever is on their minds and eating sea salt ice cream together.

Shortly after Roxas's induction, the Organization sees the arrival of a mysterious fourteenth member, Xion. Her appearance changes from person to person, depending on their relationship with her. Later, when Axel and several other members are assigned to Castle Oblivion (setting the stage for Kingdom Hearts: Chain of Memories), Roxas is paired with Xion. The two begin to bond, and the reclusive Xion begins opening up to Roxas, revealing her resemblance to Sora's friend Kairi, and her ability to wield the Keyblade. A few days later, Roxas falls into a coma for several weeks, around the same time Sora is put to sleep to regain the memories he lost in Castle Oblivion at the end of Kingdom Hearts: Chain of Memories. When Roxas finally awakens (and finds that all the members dispatched to Castle Oblivion, except Axel, have been eliminated), he suggests that he, Axel and Xion all spend time together, and the three become close friends. However, Roxas begins experiencing Sora's memories and grows frustrated when his questions about them go unanswered, becoming increasingly curious about why he wields the Keyblade and doubtful of the Organization's motives.

Meanwhile, Sora, who is still sleeping, is moved from Castle Oblivion to Twilight Town by DiZ and Naminé, who are overseeing the restoration of his memories. Xion also has a confrontation with Riku, who brings her identity and the authenticity of her Keyblade into question and suggests she leave the Organization to merge with her original self. Xion, however, is torn between doing so and staying with Roxas and Axel.

Eventually Xion discovers that she is an imperfect replica of Sora created by Xemnas from Sora's leaking memories should Sora, who Xemnas intends to use as part of the Organization's plans, turn out to be of no use. Her resemblance to Kairi is a result of Sora's strong memories of her; however, as Naminé attempts to restore Sora's memories, they affect Xion instead to the point where she begins to physically resemble Sora. Upon learning this, Xion becomes deeply confused and lost and leaves Organization XIII, desiring to become a true person, but also having a falling out with Roxas and Axel.

During a 'seek-and-capture' mission, Xigbar and Axel find Xion in Wonderland. As Xigbar prepares to fight her, he utters to himself, "You always had that smug face." Unknown to Axel, Xigbar sees the appearance of Ventus. Suddenly, while Xigbar is distracted, Xion disappears and takes him down easily. Axel questions what has just happened before his eyes. Later, Roxas defects from Organization XIII to find himself, much to Axel's chagrin.

Upon being reprogrammed by Xemnas, Xion attempts to absorb Roxas and become whole, though this would mean the real Sora will never awaken. However, Roxas battles and defeats Xion, who reveals Xemnas' motives and intentions to him before merging with him, which, in turn, halts the restoration of Sora's memories completely. Xion then dies peacefully in Roxas' arms, completely crystallizes and turns into a blinding light, as the memories she has absorbed go back to Sora. She leaves nothing but a single seashell behind, as tears run down Roxas's face. Roxas inherits Xion's Keyblade, allowing him to use two Keyblades at once (Oblivion and Oathkeeper).

Afterwards, he encounters and battles Riku, who had been dispatched by DiZ to capture him so that he may merge with Sora and complete the restoration of his memories. When Riku is nearly defeated, he taps into the growing darkness in his heart, granting him the power necessary to subdue Roxas, but also giving him the appearance of Ansem, Seeker of Darkness, who resides in his heart. Riku subsequently brings the unconscious Roxas to DiZ, who digitizes and places him into a virtual Twilight Town. The final scene, "Day 359: The First Day", shows Roxas in the virtual town thinking how everything seemed like a dream and wondering about his destiny while running and arriving at the Usual Spot, wondering if he, Hayner, Pence, and Olette will finally go to the beach.

Kingdom Hearts 358/2 Days's gameplay is similar to the action-RPG style of the previous games in the series, and takes place in a 3D environment. There originally were three status bars, HP, MP, and a new one labeled LM, but the LM and MP bars have been removed. The familiar command menu from past installments of the game has returned, this time with only three visible commands. Instead of using MP for magic you equip the spells you want to use for each mission using the Panel System. Magic has also been altered in that various forms of the same spell, such as Fire and Firaga, are actually physically different spells instead of the same attack with a different level power. A camera control scheme that allowed players to move the camera with the touch screen, and to move, jump, and attack using the control pad and face buttons is also present. Some names of Heartless have also been changed (e.g.: Rabid Dog has become Bad Dog).

Another interesting point is the height of the chairs at Where Nothing Gathers. While playing in multiplayer mode, the chairs' heights do not relate to their own preferences, but rather their rank during the missions that you go on. The members who come in lower places, out of all four members participating in the challenge, will receive lower chairs than the members who scored higher. When missions are completed, the height of the chairs will either move up or down in accordance to their previous position.

All characters also have various different forms of their weapons, each with unique stats, like the various Keyblades in the previous games.

Limit Breaks are a new addition to the series. When the player's HP drops into a low yellow section of their HP bar, a Limit Break can be initiated by holding down the A button for a few seconds. Depending on which character the player is controlling, a powerful, element based attack will be performed (e.g. Roxas goes into a frenzy, shooting around in an aura of light while hurling light crosses on every finishing attack, or Demyx rocking out on his sitar, sending pillars of water out of the ground). A second stage of Limit Break called "Final Limit" can also be used, which increases their attacking power (e.g. Roxas sends pillars of Light out, and Demyx's water blasts are accompanied by a watery explosion). Unlike Limits from Kingdom Hearts II, players can take damage when attacked while performing their Limit Break.

This is the second game in the series to feature multiplayer following Kingdom Hearts: Chain of Memories which featured the ability to fight others one on one with a feature called "Link Mode". There is a four-player non-canonical multiplayer mode, where players may choose any member of Organization XIII along with six other secret characters, which are Xion, Riku, Donald, Goofy, The King, and Sora, and go on missions. You can also play as Dual-Wield Roxas in-game. In order to unlock him in multiplayer mode, attach Zero Gear and 3 Ability Units.

The Disney Wiki has a collection of images and media related to Kingdom Hearts 358/2 Days.