“The story is not over.”
―Tagline

Kingdom Hearts II is the sequel to Kingdom Hearts and Kingdom Hearts: Chain of Memories, and like the two previous games, focuses on Sora and his friends' continued battle against Darkness. It also offers a number of improvements over the original with many new features, most notably Sora's Drive Form function, an improved camera, and in-battle options called, "Reaction Commands".

The theme song for the game is "Sanctuary" (Japanese version: "Passion") performed by Hikaru Utada.

Kingdom Hearts II begins where Kingdom Hearts: Chain of Memories and Kingdom Hearts 358/2 Days left the story off. Sora and his companions have been asleep for about a year, regaining their memories following what happened in Castle Oblivion. When Sora awakens, he eventually arrives in Twilight Town, the place where a mysterious boy, Roxas, lived before he suddenly left. Gaining new clothes and powers, Sora began his journey anew, unaware of the events that have taken place in "Chain of Memories". Sora continues his quest by unlocking paths to new worlds, learning of "Nobodies" and fighting the "Heartless", as well as facing the remaining members of the mysterious Organization XIII. As the game progresses, Sora learns about Roxas and how much they have in common.

The story begins with the player in control of Roxas in "Twilight Town". Roxas has dreams of Sora's adventures while increasingly mysterious activities begin taking place in Twilight Town during Roxas's summer vacation, especially in the last week of it. After obtaining the Keyblade to defend himself from the Nobodies, Roxas comes in contact with a young man in black named Axel. Axel appears to know Roxas, though Roxas has no recollection of him. Roxas eventually makes his way into an abandoned mansion where a girl named Naminé informs him that he is a Nobody, although he did not quite know what a Nobody was at that time. Finally, confronted by a mysterious, red-cloaked man called DiZ, Roxas discovers Sora, Donald, and Goofy sleeping in the hidden basement of the mansion. Roxas seems to merge with Sora of his own will, giving up his own existence to awaken him. As Sora, Donald Duck, and Goofy awake from their year-long slumber. Jiminy Cricket, who had previously chronicled the trio's adventures, finds that his journal is now completely blank, save for the note: "Thank Naminé" (which was written by Jiminy himself during Chain of Memories).

After meeting Pete, a new villain, and speaking with Yen Sid, the party is informed that they must once again visit many worlds to protect them from both the Heartless and the Nobodies in an attempt to stop Organization XIII. These include both old, but greatly changed places, like Hollow Bastion, and brand new worlds the party has never encountered before. In the course of their travels, the Heartless, headed by a revived Maleficent and the Organization, regain power, eventually forcing Sora to face a massive army of Heartless that are attacking Hollow Bastion. Along the way, they learn that the Ansem they fought a year ago was actually the Heartless of Xehanort, and that the Nobody of Xehanort, Xemnas, is the leader of Organization XIII. They also learn that Xehanort was an apprentice of the real Ansem, who is missing.

After the battle, Xemnas appears and reveals their ultimate goal: the Nobodies plan to create another Kingdom Hearts, a doorway to the heart of all worlds that will presumably allow the Nobodies to get their hearts back and exist fully and completely as whole people again. After confronting and defeating more members of the Organization, Sora goes to The World That Never Was to settle the score with the Organization for good; he also finally reunites with his friends Riku and Kairi. Sora learns the truth about Roxas as well; he and Naminé are, respectively, Sora and Kairi's Nobodies, created when they lost their hearts in the original Kingdom Hearts game when Sora sacrificed himself to return Kairi's heart to her body and destroy Ansem's dark Keyblade.

In the end, only Xemnas is left of the original thirteen members. Sora and Riku unite to defeat him, and his new Kingdom Hearts is closed. Sora and the others are returned to their homeworld of "Destiny Islands". Although Sora has to say goodbye to Donald and Goofy, he knows in his heart that true friends are never gone. However, sometime later, Sora, Riku, and Kairi receive a letter from King Mickey after the credits. They proceed to read the letter, but the contents are left unrevealed.

Kingdom Hearts II offers a number of key differences from the original Kingdom Hearts. While the core gameplay remains the same, new features have been added to improve the experience. The two most notable are Sora's Drive system, which allows him to fuse with one or both party allies and assume new powers, and Reaction Commands, which allow Sora and/or members of his party to perform special maneuvers in the course of battle. In addition, there are new and revamped Abilities, as well as special abilities, such as Glide, that can only be gained by leveling Sora's Drive Forms. Another thing to notice is that in order to defeat a boss, a combo must be executed.

Also notably changed is the Gummi Ship system; instead of a space shooter, the ships now operate more like a rail shooter, traveling along a fixed path while allowing the player to worry only about destroying various enemies scattered along the course. Ships can now be equipped with abilities of their own, new Gummi types such as Slash Gummis have been added, and high-level Gummi Ships may have two companion ships, called Teeny Ships, that can assist them in battle. 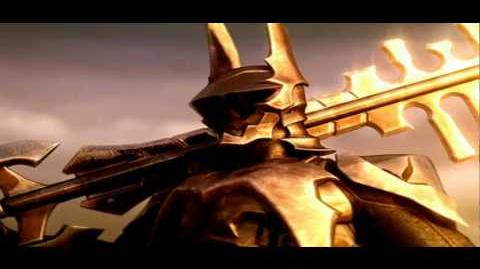 Kingdom Hearts II received critical acclaim upon release, garnering positive reviews. The game received numerous awards and high ratings among reviews including a Satellite Award in 2006 for "Outstanding Game Based on Existing Medium". It tied with Resident Evil 4 as Famitsu's "Game of the Year" 2005.

The Disney Wiki has a collection of images and media related to Kingdom Hearts II.