Kingdom of the Sun

Kingdom of the Sun (later titled Kingdom in the Sun) was the former version of The Emperor's New Groove before it was halted and drastically overhauled. The film would have originally been directed by Roger Allers with the intent to make the film an Incan epic follow up to The Lion King. The plot was more akin to The Prince and the Pauper with mystical elements and a musical. The story of its production history and its transition into the final film was chronicled in The Sweatbox.

In the beginning, the shadow god Supai had ruled the earth. Viracocha created the sun god Inti who came and imprisoned him deep in the earth. Inti then created the Incans who built a city to keep Supai from escaping, thus it became known as the Kingdom of the Sun.

Pacha is a simple llama herder who tells his flock that it is time for a cut. They are all scared so he explains why it is important ("Walk the Llama, Llama"). Pacha and his llamas discover a procession enter a secret passage to the sacred city with Snowball, his favorite llama having escaped, now part of their litter. Pacha tries to rescue Snowball, but is thwarted by the guards. Yzma, the high priestess, approaches soon to be emperor Manco Capac to pick a llama to sacrifice. He chooses Snowball. After Yzma reminds Manco that he needs a bride, he sneaks out to her underground catacombs where it is revealed that she is in league with reviving Supai so that she can restore her beauty. In order to do this, she must kill Manco who bares the mark of the sun ("Snuff Out the Light")

Pacha sneaks into the palace and sees Manco choosing his bride Nina. He finds Snowball, but they are forced to hide as the sound of approaching footsteps and voices are heard. Yzma and Hucua prevent Manco from leaving to the tavern and force him to go to bed and lock his room. Manco and Pacha see each other and realize that they look the same. Pacha suggests switching places with Manco and he agrees; allowing him to sleep in his bed while Manco goes into town with Snowball.

While making the poison, Yzma spots Manco leaving and rushes out to catch him. He ends up at the tavern and while he is distracted, Yzma "poisons" Manco, only to have accidentally given him a llama potion. Yzma still tries to kill Manco who escapes into a llama pen and Snowball becomes smitten with him. The only thing that gives him away is his birthmark. Meanwhile, "Manco" (Pacha) is awoken by Hucua, who is disappointed with the human race, and suddenly discovers that he is not Manco. After Pacha explains himself, Hucua explains that if he goes through with the ceremony, he will give him 100 llamas.

Yzma tires herself out searching for Manco and hears the coronation horns, forcing her to leave. Pacha is paraded out in town with his bride to be Nina who he immediately falls in love with, but she gives him the cold shoulder. Hucua tries to prevent him from talking. Manco sees the procession and is angry. He stops the parade by releasing the llamas into the crowd. Pacha hops down to help, something that shocks everyone, and he bursts out his pan flute to herd the llamas back in including Manco ("Walk the Llama, Llama (reprise)"). Hucua is angry that Pacha for defying the hierarchy and sends him back to his chambers.

While Hucua combs the city for Manco, Pacha is called for the coronation banquet. He flees to the llama pen to get his llamas to leave, but the food is delivered to him. Yzma tries to kill Pacha, which fails until she spots Manco as a llama. She attempts to sacrifice him for "the emperor", but Manco begins pushing new laws and ideas and demands that there be no more llama sacrifices. Nina is impressed while Snowball and the rest of the llamas chase Yzma away. She returns to Supai who angrily gives her one more chance or else. Pacha and Nina begin to grow closer as they visit the Virachocha stone. Manco overhears Nina's feelings and soon begins to feel bad about himself. Afterwards Pacha and Nina confess their love ("One Day She'll Love Me"). Hucua still searches for Manco.

As Pacha and Nina come down the mountain, Pacha tries to tell her the truth, but they hear the sacrificial horns and realize that it is Yzma who has managed to capture Manco. They make it in time and Pacha tells her to stop, but she refuses and rips off his sleeve to reveal that Pacha is a fraud and does not bare the sun mark. Hucua arrives and claims that he was the one behind the switch and Yzma humiliates him. Pacha gets dragged away by guards while Hucua spots the sun mark on the llama. He teams up with Snowball and they ride to rescue Manco just as the eclipse arrives.

However, the heroes are too late as Yzma has killed Manco and she celebrates her victory by becoming younger ("Snuff Out the Light (reprise)"). Supai arises from the ground to take over the world. However, Pacha refuses to give up and Hucua prays to Virachocha who transports him and Pacha to the Viracocha stone which turns into a real rope. Pacha, with the help of everyone in the city lassos Inti to come and destroy Supai. Yzma is reduced to dust and everything returns to normal. Manco is revived and made human again and bows to Pacha. He offers his crown, but he would rather return to his life as a llama herder. Pacha and Nina are wed and leave the city with a whole flock of llamas ("Walk the Llama, Llama (reprise)").

Various alterations to the story include the addition of Mata, a tough female llama herder that Manco (who at the time had his name changed to Cusco) would have encountered and gotten help from. She would have served as his love interest. It is unknown if Nina had been removed from the story or would have remained due to this.

Early in development, the film was titled Kingdom of the Sun, later Kingdom in the Sun, with Roger Allers as the film's director and Randy Fullmer as producer. Among those on Allers's production team were supervising animator Andreas Deja, who was in charge of the witch character of Yzma, and pop musician Sting, who, in the wake of Elton John's success with The Lion King's soundtrack, had been assigned to write several songs for the film.

Kingdom of the Sun was to have been a tale of a greedy, selfish emperor who finds a peasant who looks just like him; the emperor swaps places with the peasant for fun, much as in author Mark Twain's archetypal novel The Prince and the Pauper. However, the evil sorceress Yzma has plans to summon a dark spirit named Supai to block out the sun (the object she blames for her wrinkles), in exchange for eternal youth. Discovering the switch between the prince and the peasant, Yzma turns the real emperor into a llama and threatens to reveal the pauper's identity unless he obeys her. The emperor-llama learns humility in his new form, and even comes to love a girl llama-herder named Mata. Together, the girl and the llama set out to undo the witch's plans. In the end, the emperor turns back into a human, and he and Mata got married and lived happily ever after.

Development suffered from several attempts at trying to make the plot more original, and also from a general lack of direction. Upper management felt the plot was too similar to any number of other "Prince and Pauper" stories (including the 1990 featurette with Mickey Mouse), and test screenings of the work-in-progress generated poor feedback. Disney hired Mark Dindal, director of Warner Bros.'s comedic animated musical Cats Don't Dance, in hopes that Dindal would be able to punch-up Allers's epic, yet uninvolving, story. The result was that Dindal and Allers essentially began making two separate films, with Dindal pushing his scenes toward comedy and Allers pushing his toward drama.

Disney chief Michael Eisner and his studio executives were not pleased at the uneven story, the lukewarm test-audience response, and the slow pace of production. However, the executives were at first reluctant to intervene because of Allers's success with The Lion King, which had also had a troubled time in production. In addition, most of Allers's crew had complete faith in the director, who was determined to create a sweeping epic on the scale of The Lion King.

By the summer of 1998, it was apparent that Kingdom of the Sun was not far along enough in production to be released in the summer of 2000 as planned. At this time, one of the Disney executives stormed into Randy Fullmer's office and, placing his thumb and forefinger a quarter-inch apart, angrily remarked that "your film is this close to being shut down".[1] Fullmer approached Allers, and informed him of the need to finish the film on time for its summer 2000 release (crucial promotional deals with McDonald's, Coca-Cola, and others were already established and depended upon meeting that release date). Allers acknowledged that the production was falling behind, but was confident that, with an extension of between six months to a year, he could complete the film. When Fullmer denied Allers's request for an extension, the director quit the project.

Eisner, hearing Allers had quit, became furious, and gave Fullmer two weeks to prove the film could be salvaged or else Eisner would personally shut down production. Fullmer and Dindal halted production for six months to retool Kingdom of the Sun, while their animators were reassigned to work on the Rhapsody in Blue segment of Fantasia 2000. In the interim, Dindal, Fullmer, and writers Chris Williams and David Reynolds overhauled the film completely.

When work on the film resumed, it had a new title and a new story. Gone were the sun-capturing plot, the look-alike peasant, and the llama-herder love interest. Now the film was a buddy movie, with Yzma depicted more as a mad scientist. The co-lead became Pacha, a portly farmer from the countryside. Eisner worried that the new story was too close in tone to Disney's 1997 film Hercules, which had performed decently but yet below expectations at the American box office. Dindal and Fullmer assured him that The Emperor's New Groove, as the film was now called, would have a much smaller cast, making it easier to involve audiences.

Andreas Deja declined to return to the film, and moved to Orlando, Florida to work on Lilo & Stitch, instead. Sting's songs, related to specific scenes that were now gone, had to be dropped. Sting was bitter about the removal of his songs (which are available on The Emperor's New Groove soundtrack album). "At first, I was angry and perturbed. Then I wanted some vengeance."[2]

Given the success of the announcement of DC’s Zack Snyder’s Justice League (2021), Disney fans went to social media and wanted Allers’ version to be complete and Sting’s songs restored.

Early concept art of Yzma by Andreas Deja for "Kingdom Of The Sun".

Early concept art of Yzma by Andreas Deja for "Kingdom Of The Sun".

early models of the Yzma's cat form for Kingdom Of The Sun. 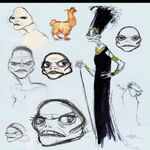 Kingdom of the Sun Manco Test

Kingdom of the Sun Yzma Test

Kingdom of the Sun The Emperor's New Groove Mata Test

Retrieved from "https://disney.fandom.com/wiki/Kingdom_of_the_Sun?oldid=4452260"
Community content is available under CC-BY-SA unless otherwise noted.