Opposition, disobedience, heroes, not getting what he wants, his wife in danger

“This city doesn't deserve a better tomorrow! It deserves to drown in it's filth! It deserves people like my father! People like you!”
―Kingpin to Daredevil[src]

Kingpin (real name Wilson Fisk) is a fictional supervillain from Marvel Comics. A ruthless and powerful crimelord, Kingpin's goal is to tear the economy of his hometown Hell's Kitchen apart so that he may rebuild it better, free of pain and crime. However, his seemingly noble agendas eventually give way to simple power-craving and manipulation. He is commonly seen as a recurring foe of Spider-Man and the archnemesis of Daredevil.

Kingpin was created by Stan Lee and John Romita, Sr.

Wilson Fisk attempts to take over Hell's Kitchen while maintaining a presentable image to the public while (unlike his traditional depictions) greatly lacks self-confidence, is emotionally unstable, and initially does not adopt the Kingpin moniker. A large focus of his story in season one is his budding relationship with Vanessa Mariana (which results in an eventual proposal) while him and his right-hand man have dealings with criminals, politicians and police officers on his side. Eventually, Fisk is legally detained thanks to Matt Murdock's work where the FBI has rounded up those involved with his plot. Fisk is then beaten in combat by Daredevil before being incarcerated. In season two, Fisk uses Frank Castle as a pawn to dispose an underground drug ring so the Punisher could dispose of any rival gangsters, and uses a major lawyer as a consigliere. In season three, the Kingpin is released from prison via a deal to be a criminal informant for the FBI. With the help of his fixer Felix Manning, he manipulates his own FBI protection detail, such as Ray Nadeem and Dex Poindexter, using the latter to frame Daredevil as a criminal to the public.

Kingpin returns in this show. During the Blip, Fisk once again rose up to power, but the criminals were murdered by Clint Barton, who was known as Ronin. One year later, he allied himself with Eleanor Bishop whose husband owed him a lot of money before his death during the Battle of New York to plot against Barton. 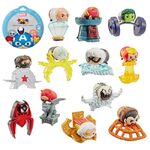