The puppies in danger

Active
Kipper is a brave Airedale Terrier from the 1996 live-action film 101 Dalmatians.

Kipper is first seen when he hears Whizzer barking from inside Jasper and Horace's parked truck after the Baduns had dognapped Pongo and Perdita's puppies earlier, when they had gone for a walk in the park with Roger and Anita, leaving them unprotected. Later, when Horace and Jasper lose the puppies, Fogey (the Colonel), while asleep in the barn, is awakened by Punch (the Captain), who was the first to receive the Twilight Bark message about the stolen puppies. Fogey then barks an urgent message which is received by Kipper. He then travels to De Vil Manor, where he manages to rescue Pongo and Perdita's puppies (along with 84 more that Horace and Jasper had bought from a pet shop) by dropping them down a duct on the manor's roof.

In the "novelization" of the film, when Kipper leads Whizzer to the duct, he is caught by Jasper, who then kicks him off the roof of the manor. This may explain why Kipper when he appears later, seems to have a limp (along with what Jasper is doing on the roof when Cruella arrives).

In the film's climax, Lucky is seen still trapped inside De Vil Manor, due to him being asleep during Kipper's escape plan. Shortly after, Mr. Skinner, Cruella's furrier, arrives at the manor and notices Lucky. When Skinner attempts to grab Lucky, Kipper arrives (limping, having been pushed off the roof by Jasper) and attacks Skinner by biting him on the rump, thus saving Lucky, and the police later arrive to arrest Skinner. Kipper is last seen arriving with Lucky, whom he brings back to Pongo and Perdita. Pongo then barks at Kipper to thank him for saving the puppies, to which Kipper barks in reply to say, "You're welcome."

Kipper also appears in 101 Dalmatians: Animated Storybook for two challenges. This time Kipper speaks, but it is Corey Burton who did his voice.

He is also seen in the barn, where Pongo and Perdita notice the Dalmatian pups before Cruella arrives. 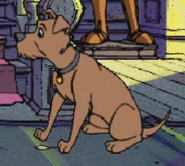