2
Kirstie Louise Alley is an American actress and spokesmodel best known for her roles as Rebecca Howe in Cheers, Mollie Ubriacco in the Look Who's Talking film trilogy co-starring with John Travolta, and Veronica "Ronnie" Chase in Veronica's Closet.

For Disney, she made a guest appearance as her Cheers character in a segment of the television special, Mickey's 60th Birthday, along with the rest of the Cheers cast including Ted Danson, John Ratzenberger and Kelsey Grammer.

In it, it's Rebecca's birthday and Mickey visits the bar, attempting to cheer her up. She then takes him out on a date and mistakes Mickey's ears for a hat when she pulls on them.

She also portrayed Sarah Rennell in the thriller, Shoot to Kill and Katherine Lewis/Tooth Fairy in the Disney Television film, Toothless.

Katherine Lewis/Tooth Fairy
(Toothless)
Add a photo to this gallery 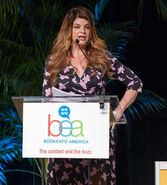 Kirstie Alley speaks onstage at the 2012 Book Expo America gala.
Add a photo to this gallery
Retrieved from "https://disney.fandom.com/wiki/Kirstie_Alley?oldid=3794637"
Community content is available under CC-BY-SA unless otherwise noted.