The Sith, war, the dark side, losing

“Patience, both of you. A second look usually pays off.”
―Kit Fisto

Kit Fisto is an Nautolan Jedi Master and one of the main characters who appeared in the Star Wars universe. Kit was killed by Sheev Palpatine/Darth Sidious in a lightsaber duel.

Kit was born Force-sensitive on the planet Glee Anselm. At a very young age, he was discovered by the Jedi Order and brought to the Coruscant Jedi Temple to be trained as a Jedi. He eventually obtained the rank of Jedi Master, becoming a member of the Jedi High Council and one of the finest Jedi that the Jedi Order has ever had.

At some point, Kit took on an apprentice, a Mon Calamari named Nahdar Vebb, who eventually obtained the rank of Jedi Knight. Shortly after the Clone Wars had begun, Kit became a Jedi General.

Nearing the end of the Clone Wars, Anakin Skywalker had discovered and informed Kit, along with Mace Windu, Agen Kolar, and Saesee Tiin, that Supreme Chancellor Palpatine was in fact Darth Sidious, the Dark Lord of the Sith. Kit, along with his fellow Jedi, went to go and confront the Dark Lord.

Before facing Palpatine, Kit was concerned that they may not be able to defeat the Sith Master, and voiced his concerns to his Jedi comrades, but Saesee arrogantly ignored him. This fear is proved to be correct when Palpatine killed Agen and Saesee relatively easily, although he managed to last far longer than his fellow Jedi Masters. Kit's lightsaber combat skills were ultimately no match for the Dark Lord's superior lightsaber combat skills, as he was killed by Palpatine.

Kit has a laid-back and accepting outlook on life, and he took his duties to the Jedi Order with enthusiasm, often sporting a wide smile when events went his way.

With Kit's sense of humour came a well-developed sense of humility. He mostly desired to keep a low profile, being mostly devoted to the peacekeeping diplomatic ways of the Jedi consulars, and is initially more interested in being appointed to the Council of Reconciliation instead of the High Council.

As a Jedi, Kit is highly intelligent and wise. Before coming facing with Sheev Palpatine, Kit was concerned that he and his Jedi comrades may not be able to defeat the Sith Master and voiced his concerns to his Jedi comrades, but Saesee Tiin arrogantly ignored him. His fear is proven to be correct when Palpatine killed Agen Kolar and Saesee relatively easily. Thus, Kit is proven to be completely aware of his own limitations.

Despite Kit's radically easy-going nature, he is shown to be surprisingly conservative on the matter of galactic politics. Kit is determined, resourceful and dedicated to maintaining peace throughout the galaxy and defending the honor of the Jedi Code. Even though he considered himself well suited to the job of training Bant Eerin, Kit still harbored doubts about his competence as a teacher and a role model.

Kit's valued weapon in his possession is a standard designed green-bladed lightsaber.

Kit Fisto was an already seasoned Jedi Master at the time of Obi-Wan's capture on Geonosis. A strike team led by Jedi master Mace Windu went to rescue him, Anakin Skywalker, and Senator Padmè Amidala. During the battle he come across the head of C-3PO in a malfunctioned battle droid, as he pinned him down, a defeated super battle droid then crushed the malfunctioned droid grinning at witnessing this before resuming the battle. At the end of the battle most surviving Jedi were surrounded by droids, but were saved by Master Yoda and his new army of clonetroopers. Kit left in a gunship with Master Windu, Yoda, and Ki-Adi Mundi. Following the death of Jedi master Coleman Trebor at the hands of the bounty hunter clone template Jango Fett, Kit was appointed to the High Council in his place and made a high general in the Clone Wars.

During the Clone Wars the Jedi Council (which Fisto was now a distinguished part of) became suspicious of Chancellor Palpatine. When Anakin told Master Mace Windu that Palpatine was really the Sith Lord named Darth Sidious, Kit accompanied him, Saesee Tiin, and Agen Kolar to arrest him. When they arrived, Kolar and Tiin were promptly murdered with ease leaving only him and Windu to face him, though in quick succession, Fisto's defenses were brushed away, he was slashed in the vitals and also killed. All Jedi soon perished joining Windu and his team upon the activation of Order 66 on the galaxy-wide, jedi-led republic clone armies (with some exceptions such as Obi-Wan Kenobi, Yoda, and Kanan Jarrus).

Kit appeared in some episodes as a main character. Most notably is in the episode Lair of Grievous, where he meets his former padawan, Nahdar Vebb, and a squad of clonetroopers led by Commander Fil on Vassek. After Fil's squad are killed, he and Vebb attempt to escape but Vebb is killed by General Grievous. Fisto is able to hold off against Grievous until he escapes with his droid, R6-H5. 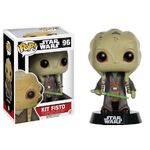 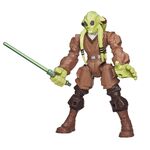