Food Rocks
Kitchen Kabaret was an animatronic show in The Land pavilion at Epcot.

The show's hostess, Bonnie Appetite, introduced the acts in a musical review and comedy format that advocated healthy eating and provided a primer on the four food groups: meat, dairy, cereals and fruits & vegetables.

"Meal Time Blues" by Bonnie Appetite - Bonnie sang this at the start of the show, explaining that it's time for her to prepare a meal, and she isn't too excited about it. She looked a bit tired. She had cookbooks and her hair wrapped in a bun and was wearing a typical housewife's dress. The lights turned off, and the next performance came.

"Chase Those Meal Time Blues Away" by Bonnie Appetite and the Kitchen Krackpots - The Kitchen Krackpots band (containers of ketchup, mayonnaise, mustard, etc.) played a boisterous ragtime intro, as Bonnie reappeared, now in showgirl attire, to "Thank you all for coming to (her) kitchen." The Kitchen Krackpots came out of the floor and reappeared in the ending of the show. These animatronics were the first food products to come. The only figure that did not feature agriculated facial features was the mustard jar.

"The Stars of the Milky Way" by Mr. Dairy Goods and his Stars of the Milky Way - Mr. Dairy Goods was a singing milk carton who emerged from a refrigerator holding an old fashioned radio-style floor microphone close to his mouth, crooning introductions to three dairy products (Miss Cheese, Miss Yogurt, and Miss Ice Cream) in the style of 1930s costume extravaganzas. Each of the dairy products performed a brief cameo in a stylized manner (e.g., Miss Cheese sang like Mae West). Every time they came out, ice cold fog poured out of the freezer.

"Meat Ditties" by Hamm & Eggz - Hamm & Eggz was a vaudeville-style comic rendition of The Meat Group Can Help You Keep Strong, in which Mr. Hamm and Mr. Eggz told jokes and sang a few short ditties. At the end, Mr. Hamm got angry because Mr. Eggz kept telling corny jokes and decided to split from the duo to join another protein group.

Eventually, their bickering got out of hand and they had to retire into the oven for a fear of total meltdown. There were also running gags in this part of the show. Mr. Eggz's bow tie moved if he was laughing, and at the end of their parts, smoke bellowed around them protecting them from being seen moving into the ground.

"Veggie, Veggie, Fruit, Fruit" by The Colander Combo and The Fiesta Fruit - Night sounds, Latin percussion, and low lighting set the mood for this number, as the produce (broccoli, tomatoes, bananas, etc.) began to chant "Veggie-Veggie-Fruit-Fruit! Veggie-Veggie-Fruit-Fruit!" Bonnie Appetite, now in a Carmen Miranda-style carnival outfit, and perched upon a crescent moon that descended from the ceiling, sang "I simply have to tell you that my friends who are singing are...delectable!" Here, another running gag was present. A broccoli piece said "Cha cha cha!" at times while his glasses flipped off, but they resumed.

Disney created merchandise with the Kitchen Kabaret characters, including coloring books, audio tapes/CDs, musical books, postcards, and pins of the Colander Combo and Fiesta Fruit. Even after its closing, the veggies and fruits reappeared as characters in the 2003 version of the annual Epcot International Food and Wine Festival. 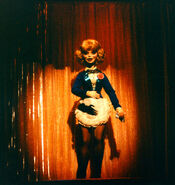 Mr. Dairy Goods and his Stars of the Milky Way 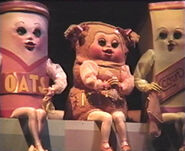 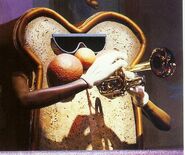 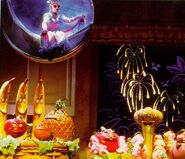