The 5 members of this band included:

Role in the Show

The Band first played a ragtime intro, before Bonnie Appetite appeared to sing. The Kitchen Krackpots came out of the floor and reappeared in the ending of the show.

The Kitchen Krackpots, along with the rest of the cast, sang a medley of each of their songs. All of the cast came back out and Bonnie said good bye before the curtains with the Kraft logo covered the stage. 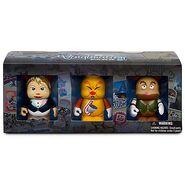 Add a photo to this gallery
Retrieved from "https://disney.fandom.com/wiki/Kitchen_Krackpots?oldid=4298403"
Community content is available under CC-BY-SA unless otherwise noted.