Images of Kocoum from Pocahontas.

Kocoum gets his chest tattooed.

Kocoum being admired by the children in the tribe.

"Great Powhatan, I will lead our warriors to the river and attack!"

"We will destroy these invaders! The way we destroyed the Massowomecks!"

Kocoum fighting back one of the settlers named Ben

"Back to the village!"

"She listens to you."

"Look at them. Now we have enough warriors to destroy those white demons!'

Kocoum mad after he sees Pocahontas and John Smith kissing.

Kocoum emerges from the shadow with a shriek of rage.

Lifting Kocoum's lifeless corpse out of the water 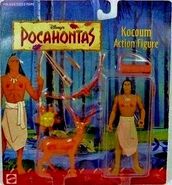 Add a photo to this gallery
Retrieved from "https://disney.fandom.com/wiki/Kocoum/Gallery?oldid=3759982"
Community content is available under CC-BY-SA unless otherwise noted.