The Koozebanian Phoob is a blue alien creature from the planet Koozebane who is interviewed by Kermit in episode 205 of The Muppet Show. It was performed by Jerry Nelson.

The Phoob is a very unfortunate creature, because it is known as the most delicious creature on Koozebane. Luckily, the Phoob has hit upon a survival strategy—it evolves very quickly into whatever is nearby. The sketch ends with the Phoob "evolving" into a clone of Kermit, causing the two Kermits to fight over which is the real one.

In I Love Muppets, Gonzo lists a number of creatures on the show. When he mentions the name Phoob, however, a picture of the Snerfs is shown instead.

The green version of the Phoob has most recently been featured walking backstage as Rowlf plays the piano after the "Bang, Boom, Splat and Pow" sketch in "Kermit's Story," the first in Roger Langridge's four-issue run of The Muppet Show Comic Book. 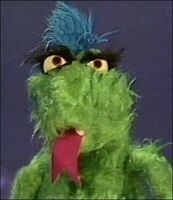 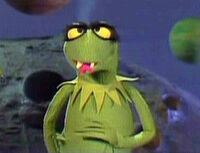 The Phoob evolves into a Kermit clone 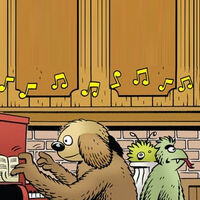 Retrieved from "https://disney.fandom.com/wiki/Koozebanian_Phoob?oldid=4052153"
Community content is available under CC-BY-SA unless otherwise noted.