Dave Fennoy (Guardians of the Galaxy)
Djimon Hounsou (What If...?)

Korath the Pursuer is a Kree who helps Ronan the Accuser and Nebula track down the Guardians of the Galaxy.

Korath, a powerful ally of the villainous Ronan, is a feared intergalactic hunter. Korath is a pursuer who is dedicated to the kill and focuses only on one thing—his target.

“You will never make it to Ronan.”
―Korath to Star-Lord during the Battle of Xandar

In Morag, Korath leads an army of Sakaarans on that planet that find Star-Lord, who had already found the Orb. Korath attempts to capture Star-Lord but Star-Lord escapes. When his master decides to betray Thanos, he worries because Thanos is too powerful but Ronan tells him not to worry with the Orb at his disposal, the Mad Titan is not a threat.

During the Battle of Xandar, Korath is killed by Drax from having his cranial implants removed.

Korath the Pursuer fights in the Kree-Skrull War.

Korath appears in "What If... T'Challa Became a Star-Lord?". Similar to the original timeline, Korath led an army of Sakaaran to find Star-Lord.

Korath is a subordinate of Thanos, who was tasked to retrieve the Cosmic Seed and bring it to him.

Korath as he appeared in the comics 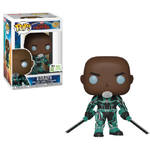