Disney Wiki
Register
Don't have an account?
Sign In
Advertisement
in: Characters, The Mandalorian characters, Females,
and 6 more

“I didn't know sidekicks were allowed to talk.”
―Koska Reeves to Boba Fett.

Koska Reeves is a Mandalorian woman from the Star Wars universe, who appears from the second season of The Mandalorian. An active member of Bo-Katan Kryze's Nite Owls five after the Battle of Endor, Koska is actively working with her leader to recapture the Mandalorians' homeworld, Mandalore, ravaged by the Galactic Empire.

Like all Mandalorians, Koska is a cool-headed warrior, capable of being as ruthless as she is mortal to his enemies and with a certain sense of honor. She doesn't have a very high opinion of the Children of the Watch cult of Mandalorians like Din Djarin, seeing them as fanatics or zealots. She is somewhat hypocritical, viewing the dreaded Boba Fett as a vulgar underling despite Fett pointing out that she herself is Bo’s sidekick. Despite her personal opinions, Koska knows how to recognize the value of a fighter, as with Din Djarin after his help in the takeover of the Imperial freighter.

Unlike most of her compatriots, Koska knows how to show a certain compassion, risking her life to save Grogu without even knowing if he was a foundling. When they go out to eat afterwards, she even amuses him a little by swallowing a tentacle.

In The Heiress, clad in a cloak, Koska spots the Mandalorian bounty hunter, Din Djarrin aka Mando, walking the streets of Trask before slipping away to inform Bo-Katan. Later, Mando and his foudling, Grogu are trapped by Quarren plunderers wanting to grab his armor in Beskar but Koska, accompanied by Bo-Katan and another member of the Nites Owls named Ax Woves attack the plunderers arriving by the air on their boat. Once the Quarrens are eliminated, Koska jumps into the water to save Grogu from a Mamacore and returns him to his adoptive father. When Koska and his teammates remove their helmets, Mando rejects them as Mandalorians due to his unknown membership in the Children of the Watch and ends up leaving with Grogu. The three Mandalorians then blow up the boat.

After dark, Koska, Bo-Katan, and Ax once again encounter Mando and Grogu when other Quarrens confront the two to avenge the death of their comrades, only to be shot by the trio. They then invite Mando for a drink with them to tell them about Mandalore's recovery project. The bounty hunter isn't initially interested until Bo-Katan offers him the location of a Jedi if he helps the trio. The Mandalorians then travel to the port to plan the boarding of a Gozanti cruiser guarded by an Imperial Remnant, Koska expressing their habit of scanning for life forms.

The next day, the four Mandalorians chase the ship leaving the harbor before reaching the bridge and eliminating the stormtroopers on guard. Quickly, they force their way inside, eliminating one by one the stormtroopers getting in their way. Arrived in front of the hold, the Mandalorians exchange fire with the enemy before being locked in by the magnetic doors in the hold control area which they activate to turn the Imperial forces out of the hold in mid-flight. Despite having recovered the stored weapons, the trio's real plans are to take complete control of the ship. As they almost reach the cockpit, the captain attempts to plunge the ship into the ocean, leaving little time for the Mandalorians who have yet to pass the stormtroopers protecting the cockpit. Once through, Koska, Bo-Katan, and Mando enter the cockpit and straighten the cruiser in time. With the captain having committed suicide after refusing to say where the Darksaber was, Koska informs Kryze that a signal has been sent and therefore they must leave. The cruiser then leaves Trask after Mando leaves the craft.

In The Rescue, Koska and Bo-Katan are having lunch at a bar on a desert planet when they are approached by Mando and Boba Fett to ask for their help in rescuing Grogu, captured by Moff Gideon. Bo-Katan declines the request under the assumption that it is a mere bounty hunting mission, prompting Fett to bitterly suggest that he dispense with the help of the two women, leading to a brief hostile exchange between him and Koska, who calls the bounty hunter a sidekick, to which he responds that Koska herself is a sidekick, and threatens to put him in a bacta tank. With the tension rising further between Bo-Katan and Fett, Koska eventually gets fed up and this leads to a fight between her and the old bounty hunter until Bo-Katan puts an end to their feud and then agrees to team up with Mando.

Attending the briefing in Slave One with New Republican marshall Cara Dune and mercenary Fennec Shand in addition, Koska listens to Bo-Katan's planning to enter Gideon's cruiser. Later, the group is aboard a Lambda-class shuttle while Fett pretends to attack them as they exit hyper-space to thwart the vigilance of the Imperial Remnant. The subterfuge having succeeded, the shuttle lands in disaster in the bay and the four women open fire on the Imperial forces then rush towards the control room while Mando goes to save Grogu. After a long and strewn crossing, Koska and the others reach the bridge before eliminating any enemy presence. She then disables the terminal's arming system, while Bo-Katan notices Gideon's absence.

Mando later joins the group with Grogu and a captive Gideon after defeating him in battle. This creates an uncertain atmosphere as Gideon's defeat allowed Mando to inadvertently claim the Darksaber that Bo-Katan and Koska had come to recover. Before things go further off the rails, the group is warned by the ship's alarm that Gideon's Dark Troopers are heading straight for them. Koska blocks every possible exit but that only slows the droids who start to punch through the door that separates them from the group. As a new clash seems inevitable, an X-wing, piloted by jedi Luke Skywalker, enters the cruiser and its pilot takes out the Dark Troopers one by one. On the bridge, Gideon shoots Bo-Katan and Mando with a hidden blaster before being surrounded by Koska, Cara and Fennec and being knocked out by Cara as he intended to kill himself. Once the threat of the Dark Troopers is eliminated, Koska witnesses the separation of Mando and Grogu who leaves with the Jedi master. 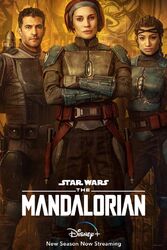 Koska with Bo-Katan and Ax.

"You’ll be talking through the window of a bacta tank."