Mr. Big's bodyguard and mode of transportation
Owner of Koslov's[1]

Tundratown, Zootopia
Koslov[2] is a minor character featured in Disney's 2016 animated feature film Zootopia. He is Mr. Big's most trusted henchman, and a member of his Tundratown mafia.

As mentioned above, Koslov is the brooding head crony of Mr. Big's mafia organization. He is often tasked with transporting the shrew to different locations. He doesn't speak, and rarely emotes, but has a soft spot for Mr. Big's deceased grandmother.

Interestingly, Koslov's role as Mr. Big's assistant is not his sole profession; outside of the mob, he owns a local tailor shop specializing in suits for "refined mammals" called Koslov's.

In early drafts, Koslov was known as Boris Koslov.[3] As opposed to Mr. Big, Koslov was going to be the antagonist encountered in Tundratown, having a larger role as a Russian gangster and the owner of a restaurant called Koslov's Palace. He was also planned to have a son named Morris.[4]

Despite his power, Koslov was not above the law. Like all predators, he was forced to wear an electric collar as a means to keep his will under the authority of prey citizens. This tied into a pivotal point in the story involving Koslov throwing a "Taming Party", where Morris turns 5, now eligible to be given an electric collar of his own. To Morris and the other children, this was a sign of maturity and the first step into adulthood; for Koslov, he regretted the day ever coming to pass, and such regret was validated when Morris, due to his joyous excitement, was shocked for the first time. A remorseful Koslov could only hug his son in response. The scene was meant to emphasize the cruelty predators faced in the original, dystopian draft of the story.[5]

In a deleted scene, it is shown that Koslov was also a loan shark who finances Nick Wilde's "Wild Times" theme park—he was visited out of desperation, following the numerous rejections from other, professional bankers.

After being captured by some of Mr. Big's henchmen, Raymond and Kevin, Nick Wilde (who Big holds a personal grudge against) and Judy Hopps are taken to the crime lord's lair. When Koslov appears, Judy believes him to be "Mr. Big", but after taking a seat at his desk, Koslov reveals Big to be an arctic shrew. He then stands in silence as a confrontation between Mr. Big and his visitors ensues (he is evidently sentimental at the mention of Mr. Big's deceased grandmother), and notably watches in a gruff physical pose as the latter pair are ordered to be iced. He later retains his calm demeanor once it is revealed that Judy saved the life of Big's daughter, Fru Fru, the day prior.

Koslov later appears standing behind the desk when Mr. Big and his polar bear henchmen interrogate Duke Weaselton for information.

During the end credits, Koslov is seen enjoying the music of Gazelle's concert with a stoic expression, while Mr. Big and Fru Fru dance together in his palms. 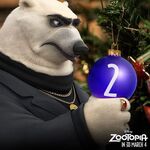 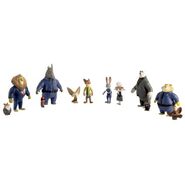 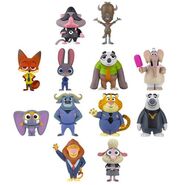 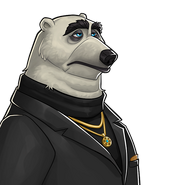