Ravagers
Guardians of the Galaxy

Kraglin was born in Xandar and later became one of Yondu Udonta's member in his own Ravager clan. He strongly became loyal to his leader Yondu.

When Peter Quill betrayed the Ravagers and stole the Orb, Kraglin assisted Yondu Udonta in finding him. Together they travelled to Xandar to confront Broker, the man to whom Quill had originally planned to sell the Orb. Udonta mocked and threatened the terrifyed Broker, causing Obfonteri to laugh at his misfortune until Broker finally gave them the name and location of the person to whom Broker planned to sell the Orb, The Collector who had a museum on Knowhere.

When the Ravagers arrived at Knowhere, they found Quill who attempted to escape. They later captured Quill and his ally Gamora when Quill surrendered to save their lives. Obfonteri was first on the scene to welcome Quill back to the Ravagers at gunpoint. Quill was interrogated by Yondu Udonta, who threatened to execute Quill for his betrayal of their team, which Kraglin supported. During the interrogation however, a deal was made so that the Ravagers would assist Quill in attacking Ronan the Accuser, who had stolen the Orb and planned to destroy Xandar; in exchange, the Ravagers would be allowed to keep the Orb after the battle.

Kraglin joined Quill, Gamora and the rest of the Guardians of the Galaxy in the battle against Ronan and his soldiers. Kraglin piloted his M-ship and helped shoot a hole in the side of Ronan's ship the Dark Aster, allowing Quill and Yondu to enter the ship and fight Ronan's soldiers. As the battle raged on Ronan ordered his ships to dive bomb the city, Kraglin joined Rocket Raccoon and the other Ravagers to shoot down the ships before they hit the ground.

After Ronan was defeated and killed, Kraglin rejoined Yondu and took possession of the Orb. As they left Xandar, Kraglin and Yondu discussed whether or not they should have delivered Quill to his father like they were hired to do. As they traveled through space Kraglin joined the other Ravagers in the celebration of their victory by dancing and drinking. However while Obfonteri celebrated, Yondu discovered that Peter Quill had given them a fake Orb and given the real one to the Nova Corps.

A few months after the Battle of Xandar, the Ravagers went to the Iron Lotus, a place in Contraxia where the Ravagers relax. There, Kraglin along with his other Ravager members partied with a bunch of women outside. As Yondu Udonta talked to Stakar Ogord, Taserface planned to overthrow Udonta saying he's gone soft. Kraglin agreed with Taserface as he believed that Udonta didn't care about the Ravagers anymore. Ayesha approached the Ravagers and hired them to track down the Guardians of the Galaxy who had stolen from them.

The Ravagers tracked the Guardians on Berhert where a few of the Ravagers fell victim to Rocket Raccoon's traps. The Ravagers eventually stopped Rocket, but Udonta decided not to kill him which led to the Ravagers and Kraglin to turn on him. Udonta was knocked out by Nebula and they all returned to the Eclector where they executed any Ravagers who sided with Udonta. Taserface then announced himself as Captain, and they locked Udonta along with Rocket and Groot up. Kraglin escorted Nebula to an M-ships after giving her a new robotic arm. Nebula informed Kraglin of her plan to kill her sister Gamora due to the traumatic past she suffered due to her.

When Groot attempted to free Udonta and Rocket by retrieving Udonta's fin but failed, Kraglin helped them escape after realizing he made a mistake as he didn't want to go against Udonta or have his friends killed. Kraglin played some of Peter Quill's music to draw the Ravagers into a trap by Udonta and Rocket.

As Udonta, Rocket, and Groot killed the entire clan of Ravagers, Kraglin waited for them in the front of the Eclector. When he was joined by the three, Kraglin disconnected the Quadrant from the rest of the ship and they escaped while the rest of the Eclector blew up, including Taserface who had informed the Sovereign of their location. Rocket then set course for Ego's Planet which caused their bodies to disfigure temporarily due to the amount of jumping the ship did between planets.

When they arrived at Ego's Planet, Kraglin stayed in the Eclector while the rest went to rescue the Guardians. While Kraglin was eating some soup and listening to Quill's music, a fleet of Sovereign drones approached the planet. Kraglin informed the Guardians that the Sovereign were coming and then flew down to the planet to retrieve the Guardians. As he went to open the door for Drax who was carrying an unconscious Mantis, Ego attacked the ship causing it to tip over and nearly crush Drax and Mantis.

Kraglin managed to turn on the ships thrusters and stabilized the ship so the two could get on the ship. As the planet was about to explode, Gamora and Nebula joined Kraglin on the ship followed by Rocket and Groot. Not being able to stay near the planet, Kraglin flew the ship away while Quill and Udonta were still on the surface.

After they retrieved Udonta's body from space, Kraglin and the Guardians held a funeral for him. After the funeral, Kraglin gave Quill a Zune, which Udonta found, telling him that it had over three hundred songs on it. Quill then gave Kraglin Udonta's Yaka Arrow as he believed Udonta would want him to have it, to which Kraglin thanked and acknowledged Peter as his captain. Suddenly, all the other Ravager factions appeared to give Udonta a Ravagers farewell. Later Kraglin practiced using the Yaka Arrow along with Udonta's fin but ended up stabbing Drax in the chest causing him to wisely retreat.

Kraglin was present, along with the other Ravagers, in the battle against Thanos. 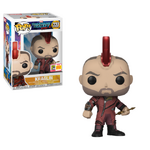 Retrieved from "https://disney.fandom.com/wiki/Kraglin_Obfonteri?oldid=3804532"
Community content is available under CC-BY-SA unless otherwise noted.