The Legend of Captain Jack Sparrow
Pirates of the Caribbean: Battle for the Sunken Treasure

Jack Sparrow, every men that he meets in the sea, Cutler Beckett

Killed by Davy Jones forced to by orders of Cutler Beckett

The Kraken is a legendary sea monster of giant proportions that is said to dwell off the seven seas. It is a prominent force in the Pirates of the Caribbean franchise, first appearing in Dead Man's Chest.

The Kraken is a gigantic cephalopod-like beast, with a squid-like mantle, a number of long, suckered tentacles at the base of its head. It also has a long, sharp tail similar to a squid and large round eyes with orange irises and black pupils. It had a large, maw-like mouth surrounded by fangs below its large eyes, and a massive body at least twice as long as its tentacles. The overall length of the Kraken is similar to the length of ten ships, which would be approximately 1400 feet in total length. Its body resembles a massive, cuttlefish-like cephalopod.

The Kraken first appears as the pet of Davy Jones, dark lord of the sea, and commanded to prey upon ships to ensure Jones had many unwilling candidates for service aboard his cursed vessel, the Flying Dutchman. The Kraken could be summoned from aboard the Flying Dutchman, with the use of a giant capstan hammer that sent a shock wave through the ocean that served as a call to the creature.

Captain Jack Sparrow was given a Black Spot by Bootstrap Bill Turner, on behalf of Davy Jones, and was forced to avoid the open water to escape the Kraken. When Jack's hat came into the possession of two men aboard a fishing boat, the Kraken followed, drawn to the piece of Jack. The creature then sank the ship with frightening ease, killing all on board. Later, when Will Turner escaped the Flying Dutchman with the key to the Dead Man's Chest, Davy Jones sent the beast to attack the ship Edinburgh Trader, that had rescued Will. The Kraken's attack killed most of the crew (the rest were executed by Jones' men under his orders) and sank the ship, forcing Will to stow away aboard the Dutchman once again until the ship had reached Isla Cruces. The Kraken then appeared again later, this time attacking the Black Pearl on Jones' orders when he failed to catch the ship. When the creature attacked, Will ordered the cannons fired on the Kraken's tentacles, severely wounding it but destroying the longboats in the process, save for the one Jack was escaping in. However, when the Kraken attacked again, it destroyed the cannons and attacked the crew, forcing Will, Elizabeth and the crew to set a trap for it using barrels of gunpowder and rum. This plan would have failed had Jack not returned and fired the shot that caused the explosion that burned the Kraken's tentacles and caused it to retreat, making it even angrier than before. Ultimately, however, Jack was forced into a confrontation with the beast due to being tricked and being chained to the mast of the Pearl by Elizabeth so that everyone else could escape, and was consumed by it aboard his ship, the Black Pearl as the Kraken pulled it down. Witnessing this, Jones stated that Sparrow's debt was paid.

Shortly after obtaining Davy Jones' heart, Cutler Beckett ordered Jones to kill the Kraken, fearing Jones may use it against him. The Kraken's death deeply affected Jones as well, as he was seen flinching at the mention of Beckett's recalling of the event. Upon returning from Davy Jones' Locker, Jack Sparrow and his companions discovered the dead beast washed up on a beach. Pintel and Ragetti approached the Kraken's face, and Pintel poked it with a long stick, celebrating the fact that the monster was dead and mused on calling themselves "Kraken Slayers" and turning the creature into an exhibit for profit. Recalling in silence that the Kraken had been the last of its kind, Jack reflected on his own mortality and the potential of being the last pirate in existence while looking into the beast's glazed eye and agreed that Beckett and Jones had to be stopped from taking control of the seas.

The Kraken first appears in "The Heart of the Truest Believer". Gold and Neal summon it to steal its ink while stuck on Neverland. It appears again in "Dark Waters".

The Kraken appears in the game as part of the Pirates of the Caribbean set: in the storyline, the player has to obtain a prize which will allow them to fend off the Kraken and battle Davy Jones. The final reward of the game is the ability to summon the Kraken itself at will.

The Kraken appears as an attraction that can be built for the player's park for gems.

The Kraken appears as a boss fight in "The Caribbean" world, inserted into the game's adaptation of the events of At World's End. Unlike the film, it was still alive (indicating that Beckett didn't order its death in this version) and took part in the Battle of the Maelstrom.

The Kraken's mouth up close

Jack Sparrow stands before the Kraken 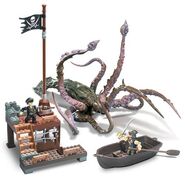 Retrieved from "https://disney.fandom.com/wiki/Kraken?oldid=3781469"
Community content is available under CC-BY-SA unless otherwise noted.