For Disney, she wrote the music for Finding Nemo: The Musical and the 2011 Winnie the Pooh film, where she also provided the voice of Kanga. Additionally, she wrote songs for the 2013 animated feature, film, Frozen and its 2019 sequel. 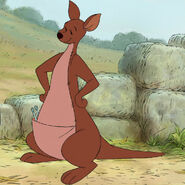 Kanga
(Winnie the Pooh)
Add a photo to this gallery

Kristen Lopez and her husband Robert, and their kids: Katie and Annie at premiere of Frozen in November 2013.

Kristen and her husband, Robert Lopez attending the 2015 D23 Expo.

Kristen and Robert Lopez at premiere of Coco in November 2017.

Kristen and Robert Lopez pose in the press room at the 90th annual Academy Awards in February 2018.

Kristen and Robert Lopez at premiere of Frozen II in November 2019.
Add a photo to this gallery

Retrieved from "https://disney.fandom.com/wiki/Kristen_Anderson-Lopez?oldid=3980592"
Community content is available under CC-BY-SA unless otherwise noted.