1985–present
Kristen Angela Johnston is an American stage, film, and television actress. She is probably best known for her role as Sally Solomon in 3rd Rock from the Sun and Holly Franklin in The Exes.

For Disney, Johnston voiced Warmonga in Kim Possible, Braddock in Amphibia, and portrayed Helen in the ABC TV show, Ugly Betty. She also played Police Chief Fox in the ABC TV show, The Mayor. In addition, she was the narrator for the American dub for Microscopic Milton. 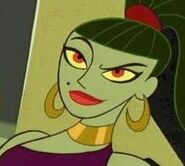 Kristen Johnston attending the the TV Land holiday premiere party for for Hot in Cleveland in November 2011.
Community content is available under CC-BY-SA unless otherwise noted.
Advertisement