Stella Maxwell (2016–present)
Kristen Jaymes Stewart is an American actress. She is well known for playing the protagonist Bella Swan in The Twilight Saga film series from 2008-12, which has grossed over $3.3 billion worldwide, and Snow White in Snow White and the Huntsman.

For Disney, she portrayed the Girl in the Fountain Line in the Disney Channel Original Movie, The Thirteenth Year, Kristen Tilson in the 2003 Touchstone film, Cold Creek Manor, and Norah Price in the 2020 Fox film Underwater. 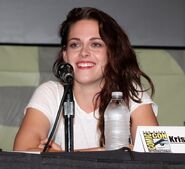 Retrieved from "https://disney.fandom.com/wiki/Kristen_Stewart?oldid=3898552"
Community content is available under CC-BY-SA unless otherwise noted.