She is well-known for her role as Galinda (later known as Glinda) in Wicked. Other Broadway credits include Precious McGuire in Steel Pier, Louise Goldman in Epic Proportions, Eve, Barbara, Passionella, and Ella in The Apple Tree, Fran Kubelik in Promises! Promises!, and Lily Garland in On the Twentieth Century. She also won a Tony Award for her role as Sally Brown in You're a Good Man, Charlie Brown, and voiced Gabi the poison dart frog in Blue Sky's Rio 2 and Princess Skystar in My Little Pony: The Movie.

For Disney, Chenowith portrayed Lily St. Regis in the 1999 TV film adaption of Annie, and later went on to portray Marian Paroo in the TV adaption of The Music Man in 2003. She also provided the voice of Rosetta in the 2008 CGI film Tinker Bell and some of its sequels. In addition, she voiced the Sugar Plum Fairy in the 2015 CGI film, Strange Magic, and portrayed Georgia King in the 2010 Touchstone Pictures film, You Again. She also played Maleficent in the Disney Channel Original Movie Descendants, and voiced the Museum Guide in Fillmore!.

Kristin Chenoweth at her Hollywood Walk of Fame Ceremony in July 2015. 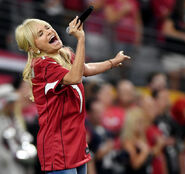 Kristin Chenoweth performing the National Anthem before the Cardinals vs. Patriots game in September 2016. 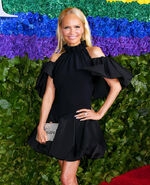