Disney Wiki
Register
Don't have an account?
Sign In
Advertisement
in: Objects, Transportation, Those destroyed,
and 2 more

Olaf's Frozen Adventure
Once Upon a Snowman

Kristoff's Sled was Kristoff's main form of transportation in Disney's 2013 animated feature film Frozen and its 2019 sequel, and very important to his ice business, as it allowed him the ability to bring the ice that he and the other ice harvesters cut down in the village of Arendelle to be sold to markets. The sled is also where Kristoff stores his belongings.

Kristoff's sled is first seen at the pre-coronation festivities as Kristoff was selling ice to a market. It is seen again outside of Wandering Oaken's Trading Post and Sauna as Kristoff explains to Oaken that he is an ice harvester.

After the trio head off, Anna explains her desire to "marry" Hans, even though they both just met that day. Kristoff argues about this, as he does not understand how a girl can marry someone she just met. The trio are then chased by a pack of wolves and are about to fall off a cliff, but Kristoff tosses Anna onto Sven's back and cuts the rope to the sled, causing them to jump to the other side safely.

However, Kristoff's sled, along with nearly all their supplies, falls to the bottom and catches fire (most likely from the sled's lantern). Kristoff looks sad and mentions to himself that he "just paid it off" before Anna pulls him up. Feeling bad about causing him to lose his sled and nearly killing the three of them, Anna tells Kristoff that she will buy him a new sled and that he does not have to help her anymore. Kristoff is about to abandon her, but Sven "talks" to him (telling Kristoff that if he does not help Anna, she will die and he will not get his new sled if she is dead), and urges him to continue the journey with her. At the end of the movie, Anna gives Kristoff a new sled as she promised. He thanks her by kissing her on the lips, and they officially become a couple.

Olaf uses the sled with Sven driving to travel around Arendelle and talk to the citizens and learn about their holiday traditions. From each house at which they stop, Olaf and Sven fill up the sled with goods and items that are part of the citizens' different traditions. During the escapade, the sled catches fire (from a piece of coal included in the sauna Oaken gave Olaf) and plummets down a gorge, destroying it.

Kristoff drives a wagon sled similar to his previous sleds. It is the source of transportation he, Olaf, Sven, Anna, and Elsa take as they journey to the Enchanted Forest.

Once Upon a Snowman

Due to the short being a midquel to the first film, the original sled appears mostly in recreations of its scenes in Olaf's perspective. However, it is also seen when Kristoff and Anna set off on it before Olaf exits Oaken's store, and is revealed to have crushed one of the last remaining carrots Anna bought for Kristoff and Sven when it falls and catches fire, much to Olaf's dismay. 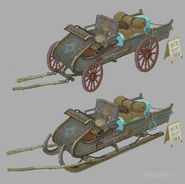